Warren cut off during Sessions debate after criticism 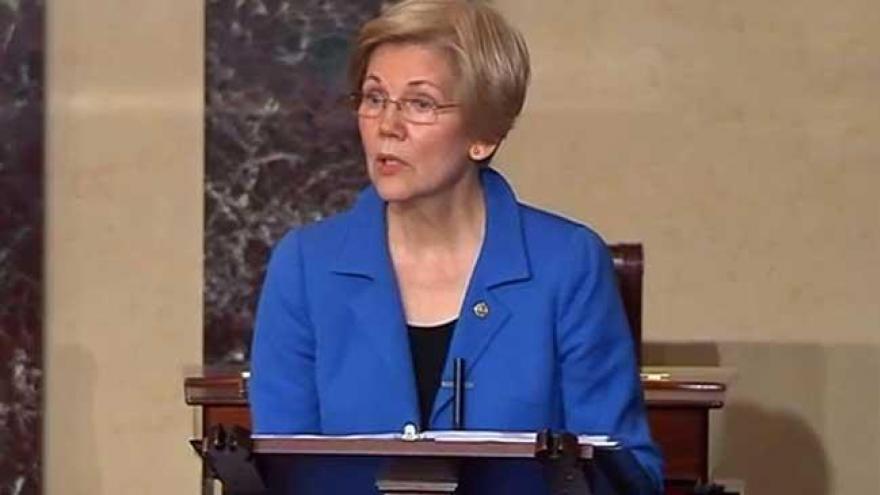 In an extremely rare rebuke, she was instructed by the presiding officer to take her seat.

Tuesday night's rule means Warren will be barred from speaking on the floor until Sessions' debate ends, McConnell's office confirmed. The debate is expected to conclude Wednesday night.

"She was warned. She was given an explanation. Nevertheless, she persisted," McConnell said on the Senate floor.

The emotional exchange occurred during debate on the nomination of Sen. Jeff Sessions, R-Alabama, to be attorney general. Warren was reading from a 1986 letter Coretta Scott King, the widow of Martin Luther King Jr., had written to Sen. Strom Thurmond critical of Sessions who was then a nominee to be a federal judge. [Click here to read the letter]

"The senator is reminded that it is a violation of Rule 19 of the standing rules of the Senate to impugn another senator or senators any conduct or motive unworthy or unbecoming a senator," said Sen. Steve Daines, R-Montana, who was presiding over the Senate at the time.

"I don't think I quite understand," responded a surprised Warren. "I'm simply reading what she wrote about what the nomination of Sessions to be a federal court judge meant and what it would mean in history for her."

"You stated that a sitting senator is a disgrace to the Department of Justice," said Daines, explaining what Warren had done to violate the rule.

About 20 minutes later, with Warren continuing to speak out critically of Sessions, McConnell went to the floor and told Warren she was in violation of the rule. At that point, Warren asked for a roll call vote on her appeal of the decision but it was defeated.

Warren is now barred from speaking on the floor for the remainder of the debate on Sessions' nomination, McConnell's office said. The debate is expected to wrap up about 7 p.m. ET Wednesday when a final confirmation vote is planned.

She later read King's letter outside the Senate floor on Facebook.

"The letter is powerful. The letter is deeply moving. And the letter is an important historical document," Warren later told CNN's Don Lemon on "CNN Tonight."

She added: "They can shut me up, but they can't change the truth."

Still she added that her options are partially limited follow the Rule 19 vote.

"I literally can't be recognized on the floor of the Senate," she told Lemon. "I have become a nonperson during the discussion of Jeff Sessions."

Democrats complained that Republicans were carrying out selective enforcement of Rule 19, arguing past controversial comments by Republicans had been overlooked by GOP leaders. They also said their hands are tied when it comes to Sessions because they will have no way to express on the floor why they oppose his nomination if doing so would violate Rule 19.

Former Sen. Rick Santorum, a CNN contributor, said Wednesday that he had been at risk of violating Rule 19 in the past himself.

"The whole reason for these rules is to keep the temperature down and to keep decorum in the Senate, to make it a deliberate body so you don't' have personal attacks," he said on CNN's "New Day."

The clash comes as senators are battling fiercely over President Donald Trump's Cabinet appointments. Sessions is one of eight nominees Democrats sought to defeat. But he is now on path to be confirmed Wednesday.

Bernice King, daughter of the Kings, wrote on Twitter: "Thank you @SenWarren for being the soul of the Senate during the #Sessions hearing. #LetCorettaSpeak #LetLizSpeak"

A few of Warren's fellow Democratic senators chimed in as well.

Sen. Kamala Harris went on tweetstorm, writing out a portion of the letter and saying, "The suggestion that reciting the words of the great Coretta Scott King by @SenWarren is an attack on a Senator is outrageous. #LetHerSpeak."

The Democratic National Committee said it was a "sad day in America."

"It's a sad day in America when the words of Martin Luther King Jr.'s widow are not allowed on the floor of the United States Senate," the DNC said in a statement. "Let Elizabeth Warren speak. The American people deserve to hear how Jeff Sessions is an extremist who will be a rubber stamp for this out-of-control Trump presidency."

And in a statement, the Congressional Black Caucus said the incident was "disgusting and disgraceful."

But Santorum said Democrats defending Warren's actions are being "political" and picking the wrong battles.

"The idea that we're going to make those fights on appointments to cabinet positions is frankly unprecedented," the CNN Senior Political Commentator said. "The President wins the election. He can put his own people in place."

CORRECTION: An earlier version of this story misstated the recipient of Coretta Scott King's letter. It was addressed to then-Sen. Strom Thurmond.