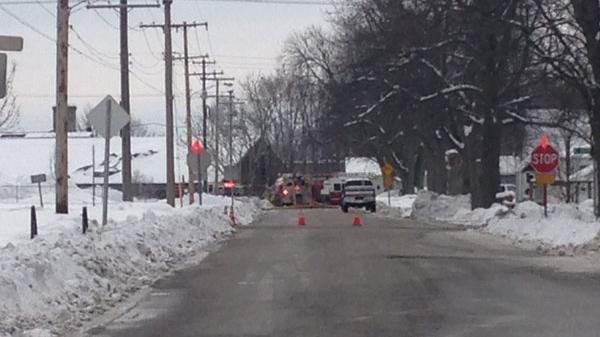 Fire crews, police, and representatives from the Department of Homeland Security and the Department of Natural Resources all responded to the Warsaw Chemical on E. Durbin Street plant after a fire broke out Friday morning.

The Indiana Department of Natural Resources says there was a fire at the plant which caused an explosion that ruptured tanks containing potentially hazardous chemicals.

A Warsaw Police officer was in the area, heard the explosion and called for assistance.

Around 50 homes in the area were evacuated.

“There were several different chemicals that were in that building. Some of those were released during the extinguishment, some of that washed onto the ground,” said Lieutenant Kip Shuter of the Warsaw Police Department.

Roads near the plant were shut down for several hours.

Eight people were treated at the hospital, including two firefighters, for chemical inhalation and skin irritation.

A plant employee was treated for burns to his hands.

The Indiana DNR says chemicals, mainly methanol, went into the storm drains and into Winona Lake, turning the snow blue and green from the dye in the chemicals.

The DNR believes thousands of gallons of chemical and water mix went into the lake.

The ice on the lake was thinned by the chemical runoff and officers are advising people to stay off the ice and not to eat any fish from the lake until further notice.

Environmental Remediation Services of Ft. Wayne will be use large, portable air compressors to introduce mass amounts of oxygen into the lake to evaporate the contaminants and aid the fish and wildlife in the lake.