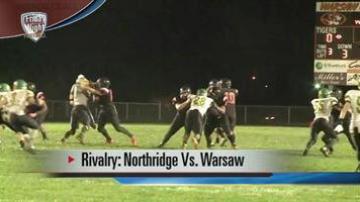 It rained on Warsaw's parade and the Raiders won 24-0. Steady rain throughout the first half made the field conditions pretty sloppy.

Warsaw High School had a homecoming parade around town before the game.

It was pouring when the game started and both teams had trouble holding onto the ball.

The Raiders had the upper hand and first scored a field goal to make it 3-0.

Fans sat in the stands with their umbrellas and the players had mud all up and down their legs.

Northridge’s Tanner Love threw a beautiful completion to Jake Wargo and he landed just shy of the goal line.

Next, the Raiders inched into the end zone to make the score 10-0.

At half time it stopped raining just in time for the girls on homecoming court to walk out onto the track in their pretty homecoming dresses.

The second half stayed dry and there wasn’t much action until the fourth quarter.

Northridge's Tanner Love floated the pigskin high and wide to senior wide receiver Sam Ahonen to score a touchdown and make the score 17-0.

However, the good ideas kept coming from Austin Head.

He sent a pass flying into Zach Webb's hands and the wide receiver crashed into the chains.

There was a sneaky hand off by Tanner Love to runningback Travis Schlabach. The junior sneaked over to the sideline, cut a hard right, and used his speed to score.