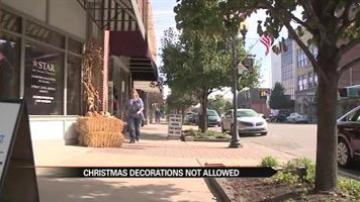 WARSAW, Ind. --The city of Warsaw will not be decorating the light poles with garland this year. City officials say the light poles cannot support the weight of the garland.

Rhonda Helser was born and raised in Warsaw. She says the city comes alive during the holiday season.

"They decorate the streets and put up lights and they have events that go on downtown," said Helser. "I love it, it's great."

Typically when the fall decorations get put away, the garland and Christmas decorations come out.

But the garland won't come out this year.

"They didn't have them up last year and it does make a difference with the scenery," said Helser.

Even though these light poles appear sturdy high winds make them very unstable.

Mayor Joe Thallemer says he concerned the poles cannot support the garland hanging from them.

"When you put a garland from one pole to the other, it is not so much the weight as it is when the wind hits that and when it's up high there is a torque and a force down at the base and it actually weakens the base," said Thallemer.

"It is just like decorating a Christmas tree at your house, the more you decorate it up the more people take notice and I just think that without the garland, I can't say it is going to look bare, but it will be something that will be missing," said Brian McClelland, owner of B Max on Buffalo.

City officials say residents shouldn't worry, the downtown area will still have decorations for the holidays. They say businesses will put up wreaths to replace the garland.