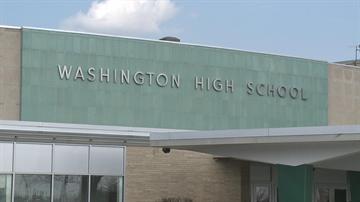 SOUTH BEND, Ind. – Over the past two-weeks three bomb threats have been made against Washington High School, now four students stand accused of making the threats.

One of the threats, left on a teacher’s desk, indicated that the school would be blown-up on March 16.  On Thursday afternoon officials with the school and the South Bend Community School Corporation addressed the safety concerns.

"We have taken each of these threats very seriously, we've conducted internal investigations and already have four students who are facing school disciplinary action and may well face criminal charges related to these incidents," explained Washington High School Principal George McCullough.  "I'm confident that our school is safe every day."

According to officials, within days of the threats being made school staff and police the students believed to be responsible were caught.  Though there isn’t believed to be any danger to the school or students, staff will continue to be on alert.

“The staff has been reminded to be vigilant and to report any suspicious activity,” McCullough explained.

“I can speak from my experience as a high school principal, we had threats on occasion over the year,” Schmidt described.  “Every single threat we were able to trace to a student, I’m not saying that’s always the case, but I’m saying it’s very easy to call a school and make a threat, to write a note and leave it on a teacher’s desk.”

Though the threats indicated that something would happen on March 16, Schmidt said officials are confident there would be no danger and that students would be expected in class.

"Parents have a choice to keep their students home or not, we expect them to be here,” Schmidt said.  “Because, if they're not in school, they're not learning."

Officials would not go into detail about the students accused of making the threats, saying it was still a “police matter.”  But, the four students are not being allowed to return to school.  Whether or not the four will face criminal charges will be determined by the St. Joseph County Prosecutor’s office.

Anyone who has knowledge of an unsafe situation in our school is encouraged to report this information immediately. Anonymous reports can be made to our Tipline by text or through the Internet. (Tipline can be accessed from the WHS website: www.sbcsc.k12.in.us/washington or by sending a text: @washington to 574-607-4891.)