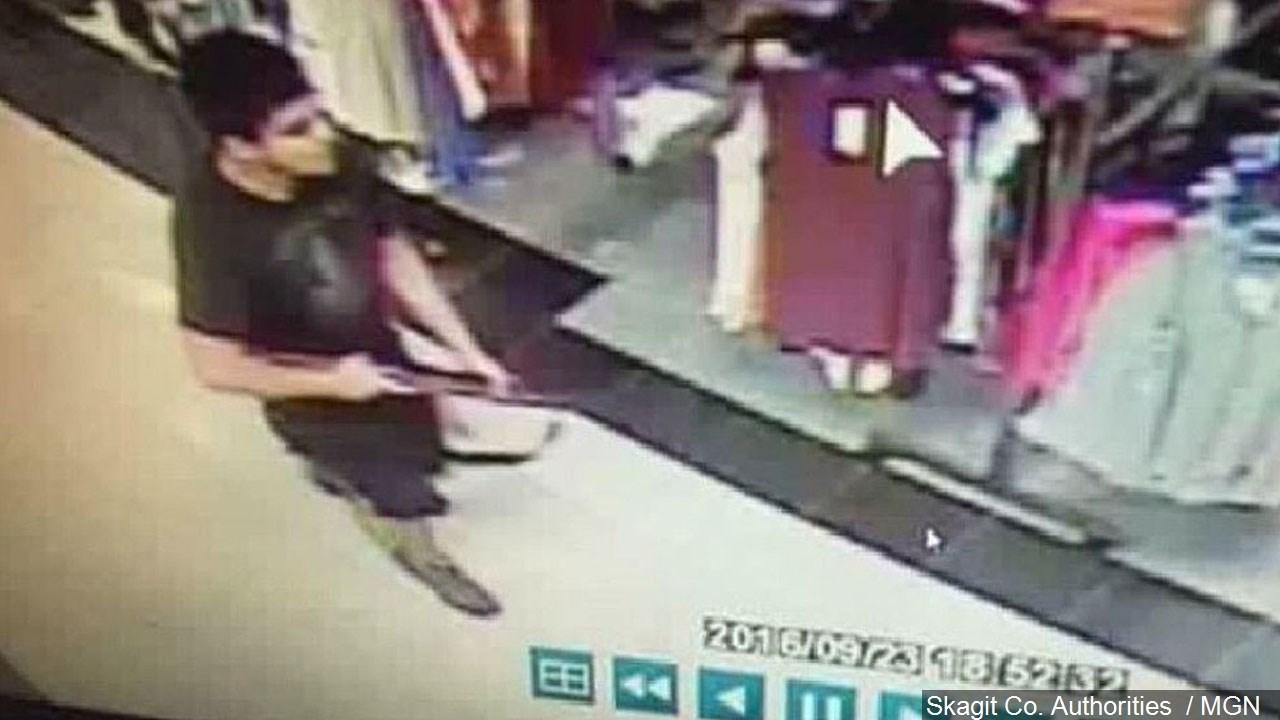 By Faith Karimi and Ray Sanchez

(CNN) -- A blurry surveillance photo of a rifle-toting man accused of shooting four women and a man dead at a Washington state mall could be the biggest lead in the hunt for the shooter.

But authorities were still searching Cascade Mall in Burlington for evidence a little more than 12 hours after Friday night's rampage, and they had not identified the attacker or his victims Saturday.

"There are people waking up this morning whose worlds are changed forever," Mayor Steve Sexton told reporters Saturday.

"The city of Burlington has probably changed forever," he said of the town about an hour's north of Seattle. "This is a senseless act. It was the world knocking on our doorstep, and it came to our little community here."

Urging residents with possible leads to come forward, the mayor added, "Our support goes to them to extend the long arm of the law to help get that son of a bitch who did this to our community."

Authorities believe only one person fired the shots at the Macy's in Cascade Mall.

A critical lead in the case comes from security cameras footage, which captured the suspect initially appearing to enter the mall unarmed and -- about 10 minutes later -- walking into Macy's carrying a rifle.

It's unclear whether the suspect knew his victims.

He said police had recovered a rifle at the mall but would not disclose the type or caliber of the weapon.

Skagit County coroner Hayley Thompson said she had not yet been able to identify the victims.

A FBI official told reporters there was "no evidence at this time" of a link to terrorism.

The gunman vanished into the night Friday along Interstate 5 after the attack, said Sgt. Mark Francis, a spokesman for the Washington State Patrol.

Brandi Montreuil told CNN she was watching a movie at the mall when attendants suddenly told them to leave.

"I didn't know anything," she said. "The theater attendant came in and apologized for stopping the movie and said they were asked to have everyone leave immediately."

At first, she thought it was a drill.

"But you immediately think about what happened in Aurora, Colorado, so you start moving faster," she said, referring to the 2012 shooting at a movie theater that left 12 dead.

When they got outside, they saw police vehicles but no officers in sight, Montreuil said.

"We didn't know if it was a fire so we were looking for smoke of some kind. Then a few officers started canvassing through the crowds, asking if anybody saw anything."

An officer "with a large gun started yelling for people to leave and fast," she said.

Armando Patino said he was working at a T-Mobile store near Macy's when he heard the commotion.

"Out of nowhere I just hear somebody yell and then after that, I turn around and just look at the Macy's and I just hear shots," Patino told CNN affiliate KOMO-TV in Seattle.

"I hear one shot and then stand kinda still and like two three other people start running out saying, 'gun.' "

Some people dashed out of Macy's, unsure of where to go.

"I just moved them into the (T-Mobile) store," Patino said.

"We went in the back where we have a door ... and we just stayed there until they told us to evacuate."

A bus transported survivors to a nearby church as authorities warned people to stay indoors and avoid the mall area.

Dozens of cars were left behind in the parking lot, according to Francis of the State Patrol. He said it's unclear if one of them belongs to the gunman.

Those who left their cars at the mall were told to check back the next day.

Authorities released a photo of a man they said was the shooter, saying he prowled the mall armed with a rifle.

"Here is the shooter. We believe just one shooter. ... Armed with rifle," Francis tweeted. A manhunt is underway as police work on a few leads.

Washington State Trooper Rick Johnson told CNN they got reports that the suspect was behind some buildings headed to the freeway.

"They're canvassing the area right now, and ... (he) has not been located at this time," Johnson said early Saturday.

The FBI office in Seattle is helping with a review of intelligence. There's no information to suggest additional attacks were planned in the state, it tweeted.

'Stay close to friends and loved ones'

"Follow detour warnings, stay close to friends and loved ones as we await more information and, hopefully, news of the suspect's capture," he tweeted.

Inslee sent his condolences to the families of the victims and prayers to those injured.