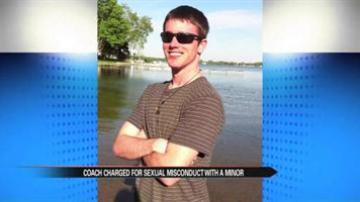 SYRACUSE, Ind.-- A Wawasee High School soccer coach has been arrested for sexual misconduct with a minor.

Josh Secor is accused of having sexual relations with a fourteen year old girl.

Secor is 20-years-old and graduated from Wawasee High School.

ABC57 talked to several ladies at a local salon in Syracuse who said they were upset when they heard about the situation.

Casandra Ratliff said, “Fourteen is too young for a 20 year old to be with. And he should have known better than that in the first place especially working at the school. He should have known something like that was going to get out.”

The prosecutor told ABC57 that Secor was charged with one count of sexual misconduct which is a felony.

Ratliff said, “People have been talking about it in here all day at the salon.”

Superintendent Tom Edington said Secor was unpaid and volunteered as an assistant coach for the men’s soccer team.

Edington said, “This wasn’t a teacher, it wasn’t a paid employee. It was someone we checked and allowed to volunteer.”

Edington also said the school is doing everything within its power to not disclose information about the minor.

Megan Dinse said, “A twenty year old should know better than to have sexual relationships with a fourteen year old.”

Dinse is a teacher at a school in Michiana and she says that behavior is unacceptable.

Dinse said, “If you’re going to be in a school system, whether paid or unpaid, you should know that’s inappropriate, not to mention illegal.”