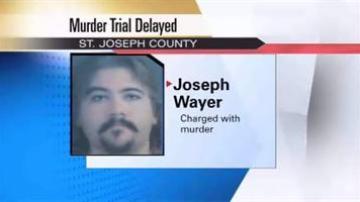 ST. JOSPEPH COUNTY, Ind. -- A Goshen man accused of killing his ex-wife last winter will not head to trial until early next year.

It's the second trial delay for Joseph Wayer III.

The defense filed a motion to continue the trial and the court granted the motion. Wayer was set to go to trial in November, but it has been delayed until February 11, 2013.

Wayer is charged with stabbing Barbara Sheppard to death in a Mishawaka alley, near Lincolnway and Byrkit, in December.

Wayer was arrested on murder charges in February.