Website lists Goshen park as a racy hook up spot 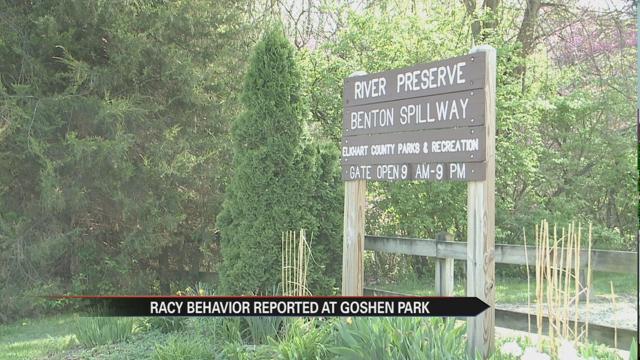 A park in Goshen meant for family fun is now being used for something completely different. Benton Spillway can be found online listed as a “hook up park.”

The Elkhart County Sheriff's Department says acts of indecent exposure were reported at Benton Spillway, also known as Benton Park. The lewd acts took place Wednesday around 2:00 p.m. off County Road 31, less than half a mile from Benton Elementary School.

David and Candy Santos live next door to the school. They say they heard of racy behavior happening in the park, but never witnessed it firsthand.

The Santos describe their neighborhood as quaint, but after running into two men engaged in sexual acts they decided to file a report.

“There are a lot of families who go down there to fish or just go and walk and that is definitely not something I would want my family or children to come up on,” said Candy.

The couple was walking through Benton Park when Candy says they saw something that she could barely put into words.

“We were coming out of the woods and turned the corner and looked over across the water and saw two gentlemen and they were…” says Candy.

She says she felt embarrassed to say that the two men were openly performing sex acts at a public place where families frequent.

“That happens down at that park more often than we would like it too,” says Candy.

She says living so close to the park she sees some of the same people visit the park and doing some pretty racy things. Candy says she has also heard rumors of it being a so-called “hook up park."

Two of the top five results are links to the website Cruising Gays.

Cruising Gays is described as the world's largest hook up guide and lists local “hook up” spots.

In the Goshen area, five locations are listed and include tips on how to get away with “hooking up” in these public places.

This is something that concerns Candy and she hopes law enforcement can put an end to it soon.

“We would just like to see these park cleaned up so we don't have to worry,” said Candy..

Baintertown is one of the parks on the Cruising Gays website and those who live near Benton Park think the problem has now moved to their neighborhood park.
Share this article: