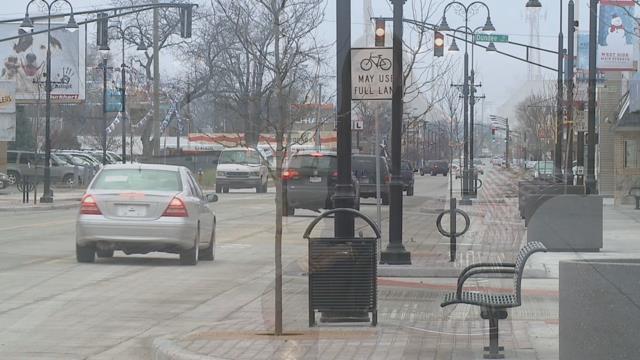 “This is a whole community effort that had some bumps and some hills in it,” says Oliver Davis, of the South Bend Common Council.

Juan Cervera whose family owns La Rosita on Western Avenue remembers the struggles the ice cream shop faced over the past few months.

“It was tough it really was because it did affect business quite a bit,” says Cervera.

On Thursday, during an official reopening ceremony, business owners and community leaders celebrated the end of the construction.

“Not only people here on the west side of the community but also from other sides of town as well,” says Cervera.

More options are becoming available with a newly opened grocery store and Michiana’s only tortilla shop.

“There is a lot of traffic come and go and I think that’s why we decided to open right here on Western Avenue,” says Estevan Reynoso, Co-Owner of El Sol.

Reynoso says he may be new to the block, opening in November, but selling freshly made tortillas is attracting a wide clientele.

“All different races we had a couple kids from Notre Dame they were happy on Saturday and I’m just welcoming anybody,” says Reynoso.

Cervera with La Rosita which has been around 13 years says that is what it has always been about.

“We want to bring people together that’s what it is and we have a nice place to do that so why not do it on Western Avenue right?” says Cervera.

This is the fifth smart streets project to be completed in South Bend. Centellas says he is working on creating monthly events similar to ‘First Fridays’ to motivate people to visit the west side.