What the UK election earthquake means for the world 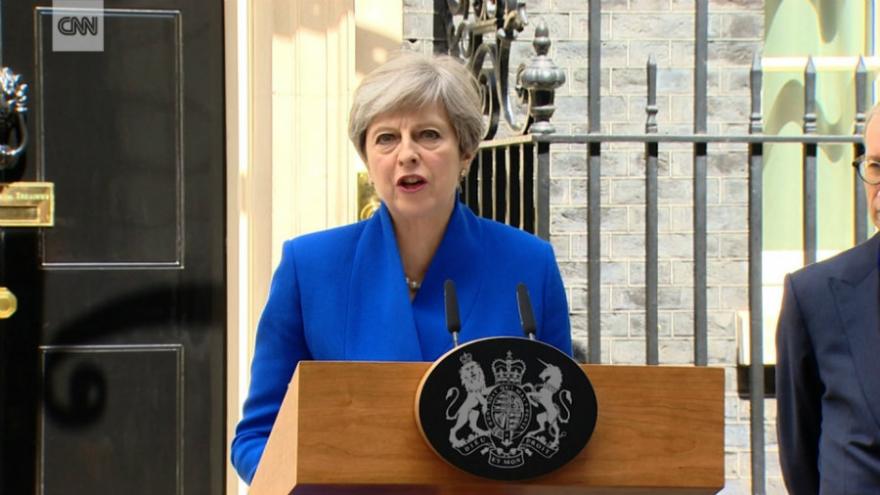 (CNN) -- UK Prime Minister Theresa May called for snap elections with hopes of increasing her majority in Parliament. She'd argued that the elections would give her the boost she needed to have a strong hand in negotiations to leave the EU. But now, after losing her majority, the Conservative Party's embarrassing showing has catapulted British politics into the unknown.

As May plans to form a minority government propped up with the support of Northern Ireland's Democratic Unionist Party (DUP), the far-reaching implications of this election earthquake are soon to be felt around the world.

Here's what to expect:

US President Donald Trump spoke Friday with May "to offer his warm support regarding the election," according to a White House statement. Trump emphasized his commitment to the relationship between the US and UK and "underscored that he looks forward to working with the Prime Minister on shared goals and interests in the years to come."

The UK has been one of Trump's few European friends since he took office.

May was the first foreign leader to meet Trump at the White House -- the two were photographed holding hands as they walked to a joint press conference during the visit, a physical hint to their close diplomatic ties.

She's been heavily criticized by many in the UK for cozying up to the US leader, but has staunchly stood by him, consistently citing a "special relationship" that has tied the two nations together since the days of Winston Churchill and Franklin D. Roosevelt.

May's hardline stance on immigration, her questionable record on the environment, and interest in a special trade deal with the US mirrors some of Trump's policies.

When Trump pulled out of the Paris climate deal, May declined to put her name to a letter by other European leaders decrying the decision.

In the aftermath of the recent London terror attack, which killed eight and injured 48 others, Trump lashed out at London mayor Sadiq Khan on Twitter, sparking a debate as to whether Trump's state visit invitation should be revoked. May didn't intervene in the much-publicized spat. To many, her silence was seen as weak and further damaged her reputation in the public's eye days before the election.

As long as May stays in office as the right-leaning leader, not much is expected to change between the two leaders' transatlantic alliance.

In contrast, the opposition Labour leader Jeremy Corbyn, whose party gained at least 29 seats in Parliament, has openly shared his misgivings about the US leader. Last month, he called the Trump administration "erratic," saying that he wouldn't "pander to it" under a Labour government.

Although a Labour government is not on the cards, a strong footing in Parliament will undoubtedly give voice to a more accepted political push back against Trump -- who has become increasingly unpopular in the UK.

Brexit negotiations have just become a lot more complicated in the UK.

Brexit talks between the UK and the European Commission are scheduled to start on June 20 and that timetable should hold, according to EU President Jean-Claude Juncker. On Friday, Juncker said that he hoped that the election result would not have a "major impact on the negotiations we are desperately waiting for."

For some European leaders, the election result does complicate the situation. EU commissioner Günther Oettinger said: "A weak partner weakens the whole negotiations."

May's election kerfuffle inspired some Europeans to take an open jab at the British prime minister.

In a series of tweets, Siegfried Muresan, leader of the European Parliament's largest party, the EEP said: "'I will be a bloody difficult woman to Juncker' said May 5 weeks ago... this morning she looks bloody weak. Until yesterday, Theresa May campaigned. Today she needs to start working. She needs to tell British people the truth: #Brexit weakens UK."

Throughout the campaign, May maintained that only she would be able to get the best deal for the British public during Brexit negotiations. However due to her poor showing, May is now forced into an informal alliance with the socially conservative DUP who have campaigned for a "soft" Brexit, retaining more of the links to Europe that currently exist.

How May has been working with key actors in the Middle East has been highly criticized by her opponents -- and much of the British public throughout her tenure.

During the election campaign, the public's attention turned towards May for her controversial arms deals with Saudi Arabia. She had visited Saudi Arabia as part of a tour of other Gulf Arab countries to promote post-Brexit trade deals.

Dr. Russell Foster, lecturer in European politics at King's College London says that as the UK leaves the EU, it will continue to secure trade deals with the Saudis, even if they are unpopular at home.

Foster hypothesizes that May will step down soon, making way for Foreign Secretary Boris Johnson who will pay lip service to the public's concern while continuing to quietly sell weapons to the powerful Middle East actor.

"All governments have been selling the Saudis arms since the 1970s, yet there is an expectation that it will stop. We might see a shift there (with a new prime minister) but I don't think for a moment it would stop - it would simply become a hidden aspect of our trade," he said.

Dr. Nina Musgrave, assistant director at the Centre for Defence Studies at King's College, told CNN that under May's Conservative-DUP alliance, she doesn't see a big change coming in matters of the Middle East, but pointed to the DUP's support for the Israeli state.

"It is likely that this new government will nurture and possibly even strengthen UK-Israeli relations," she said.

In opposition, Labour leader Corbyn has long criticized Israel's approval of additional settlements in the West Bank, adding that he would have recognized a Palestinian state if he had become prime minister. Although Corbyn lost the race to Downing Street, Musgrave says that Labour could still have a say in the UK's Middle East foreign policy.

"The surge in Labour seats means that calls for a transformation of Middle East policy will just become stronger and more consistent."

As the UK exits from the EU, it will also leave the treaty that allows free movement of EU citizens within the bloc. As immigration from European countries drops, an increase of migrants from the Commonwealth could be expected to fill jobs previously held by European migrant workers.

The new government could make a deal that encourages more immigration from Commonwealth countries -- places that some see as "somewhat British" and "less hostile" than other nations, according to Foster.

"For the man on the street, an immigrant from South Africa, Jamaica, Australia or another Commonwealth country would be preferable than a man from the Middle East," he explained.