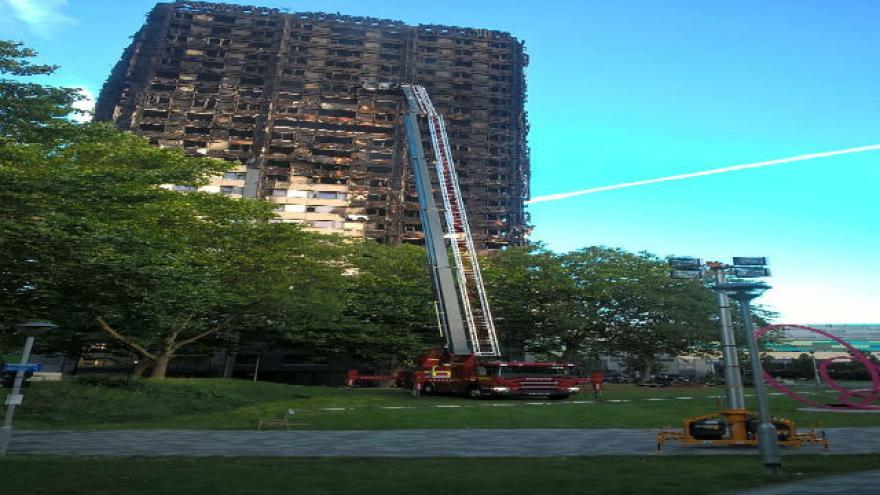 Over 60,000 units of the refrigerator identified as the source of the deadly Grenfell Tower fire were produced before the model was discontinued in 2009, according to Whirlpool. Photo courtesy London Met Police

LONDON (CNNMoney) -- A Hotpoint refrigerator has been identified as the source of last week's deadly Grenfell Tower fire in London, prompting Whirlpool to ask people who own the same model to contact the company.

The Metropolitan Police said Friday that the massive blaze originated with a Hotpoint fridge freezer manufactured by Whirlpool subsidiary Indesit.

Whirlpool said in a statement that 64,000 Hotpoint units carrying the model numbers FF175BP and FF175BG had been manufactured between March 2006 and July 2009.

It said that owners of the model should contact its customer hotline and provide their details. Authorities said the model had never been recalled.

Whirlpool, which acquired Italy-based Indesit in 2014, pledged to work with authorities as they investigate the fire that left at least 79 people dead or presumed dead.

"We offer our most profound condolences to the victims, those who have lost loved-ones, homes, and possessions, and to their friends and families," Whirlpool said in a statement. "We are addressing this as a matter of utmost urgency."

The U.K. government has ordered an "immediate examination" of the unit by technical experts.

But it added that there was "no specific reason for consumers to switch off their fridge freezer pending further investigation."

Whirlpool said that fewer than 64,000 units were likely to still be in use because of normal obsolescence.

The Metropolitan Police said they are considering manslaughter charges among the criminal offenses that may have been committed in relation to the fire. Police said they are focused on how the blaze started, how it spread and whether any person or organizations should be held responsible.

Speculation has focused on the role that cladding apparently used in a recent refurbishment of the tower may have played in the fire, which appeared to spread quickly up the exterior of the tower in the early hours of June 14.