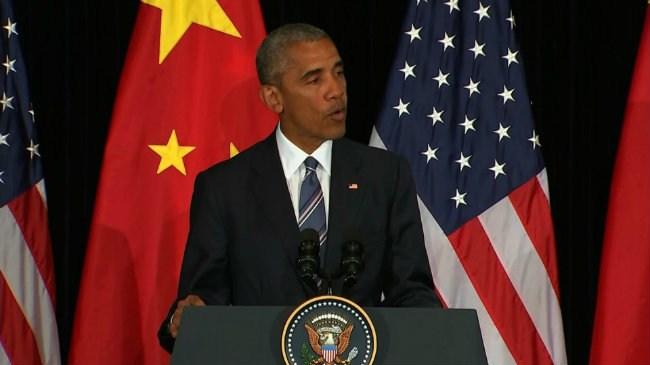 This comes after Duterte lashed out at Obama for wading into the issue of the Philippines' leader's controversial policy toward drug dealers.

Obama and Duterte had been set to meet in Laos this week, where Obama is attending a meeting of Southeast Asian leaders.

White House officials previously said Obama would confront the Philippines President about his country's handling of drug dealers, including extra-judicial killings, or government executions without the benefit of judicial proceedings.

But the Filipino leader did not take kindly to that notion, saying Obama had better think twice about raising the issue of the killings.

"Who does he think he is? I am no American puppet. I am the president of a sovereign country and I am not answerable to anyone except the Filipino people," Duterte scoffed in a speech Monday. "Son of a b****, I will swear at you."

Obama instead will meet on Tuesday with President Park Geun-hye of South Korea.

Duterte went on to blame the US for causing the unrest on the southern Philippines Island of Mindanao.

"As a matter of fact, we inherited this problem from the United States," he said. "Why? Because they invaded this country and made us their subjugated people. Everybody has a terrible record of extra-judicial killing. Why make an issue about fighting crime?"

He added: "Look at the human rights of America along that line. The way they treat the migrants there."

Obama: Nothing off the table

In response, Obama suggested earlier Monday his planned meeting with Duterte may not go forward.

"I always want to make sure if I'm having a meeting that it's productive and we're getting something done," Obama said during his news conference.

"If and when we have a meeting, this is something that is going to be brought up," Obama said, referring to the Philippines' controversial record of combating drug crime since Duterte took office earlier this year.

The Philippines war on drugs

Since Duterte was elected, more than 1,900 people have died, including at least 700 in police operations that were part of the president's hardline war on drugs.

"Double your efforts. Triple them, if need be. We will not stop until the last drug lord, the last financier, and the last pusher have surrendered or put behind bars -- or below the ground, if they so wish," Duterte said during his State of the Nation speech on July 25.

Despite the bullish tone, a government spokesman insists that the Duterte administration is against any form of extra-judicial killings.

"We do not condone these acts," Presidential Communications Office Secretary Martin Andanar said.

"(The) government is here to save our people from the drug menace and punish the offenders, including the big-time ones. The PNP (Philippines National Police) continues to investigate situations involving vigilante killings and operational aspects where deaths are reported."

Human Rights Watch has called for the International Narcotics Control Board and United Nations Office on Drugs and Crime to condemn the "alarming surge in killings of suspected drug users or dealers" in the country.