Why I march: People reveal what compelled them to join March for Our Lives 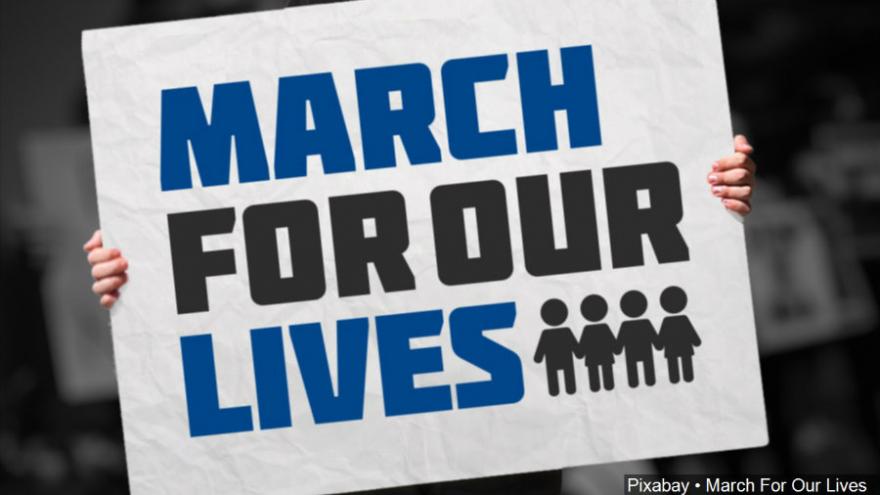 (CNN) -- From one tragic event came many reasons to march.

They shared concern for themselves and others, and a concern for the future. They may have been hurt by events the past. They wanted to be part of history.

At the main march in Washington and at hundreds of other planned marches worldwide, here's why some felt compelled to march.

To protect her sister

Courtney Wilkerson, 18, from Tampa, Florida, marched in her city because she was worried about her younger sister.

"I marched because I was so shaken by the last few shootings that claimed so many lives. I worried so much about my 8-year-old sister who is in third grade. I didn't want to come home one day and find that she won't be there. It isn't fair that someone so sweet and innocent can be taken in an instant."

"I wanted to use the right that so many had to fight for, so I registered to vote today as well. We all have to contribute and vote if we want to see real, meaningful policy put into place."

To defend all affected

Ursula Hoefer, 41, and her husband, Gerry Gainford, stopped their vacation in Las Vegas to join the movement.

"Students shouldn't be afraid to go to school; women shouldn't be more likely to be killed by their partners; black lives matter; background checks are essential; gun culture has to end; government shouldn't be bought and owned by the NRA, which (has) become a terrorist organization. All of the reasons. It has to stop."

To join her fellow peers

Abigail Ramos, 18, a freshman at Syracuse University, traveled to Washington to join the rally.

"I'm marching because my generation will not be silenced. We are the future of this country, and we say that enough is enough -- the time for change is now."

To send a message to lawmakers

Becky Quiroga is an art teacher at Jose de Diego Middle School in Miami. She painted the poster of Emma Gonzalez that she carried with her while marching in Washington.

"I was inspired by Emma's speech after the shooting and I played it for all of my students. They loved it. They were so inspired. We actually wrote letters to Marco Rubio, Rick Scott, and Donald Trump. They had their choice to write them if they chose to. And then when they announced the march I bought my flight that day."

To empower the next generation

Leah Barterian, 34, attended March for Our Lives in Detroit. Barterian works at the Detroit School of Arts with the Future Project, a nonprofit that helps students to achieve their dreams.

"I march for commonsense gun laws. I march for the safety of students in their schools. I march because I firmly believe that these students are our future, and I am proud to stand next to them."

To stand with survivors

Erik Reynolds and his two children, Josh and Sarah, traveled from Denver to march on Washington. Reynolds graduated from Columbine High School in 1993.

"We've been having this conversation for 19 years and we need to stop having it. We need to do something about it."

His little sister was a freshman at Columbine when 13 people were killed:

"She was eating lunch with one of the first kids that was killed. I'm generally a conservative on most issues, but we need to do something about gun violence. We need to change. We need to think about the Second Amendment."

To support teens in their efforts

Rabbi Melissa Buyer-Witman brought her children to the march in New York.

She says a lot of her work revolves around young people, and she was motivated to participate in part by "the mounting frustration of students who continue to feel unsafe, unheard or dismissed because of their youth."

During the march her 9-year-old listened to a Newtown teacher recalling having to huddle over 9-year-old students in the library.

"She unfortunately knows now how real and close this is to her. We will all continue to support our youth who deserve more protection than someone's gun."