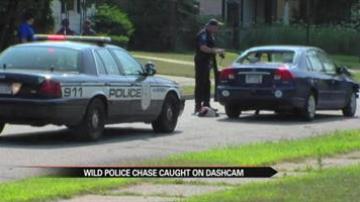 WARREN, Mich. -- A Warren police officer pulled over a driver for failing to stop at a stop sign, and the driver pulled the officer into his car and began to drive.

The driver dragged the officer down the road until he recovered his balance.

Once on his feet, the police officer got into his patrol vehicle and chased the suspect.

The driver then tried to escape into an alley.

"The officer gets out, the bad guy puts the car in reverse, accelerates, and goes toward the officer and the scout car. The officer fires three shots at that point from his duty weapon," said Warren Commissioner Jere Green.

The driver was shot twice but got back in his car and kept driving.

He was eventually caught a few minutes later, and he was taken to the hospital.

The officer involved was also taken to the hospital with a back injury.

Police say they found drugs and cash in the man's car.