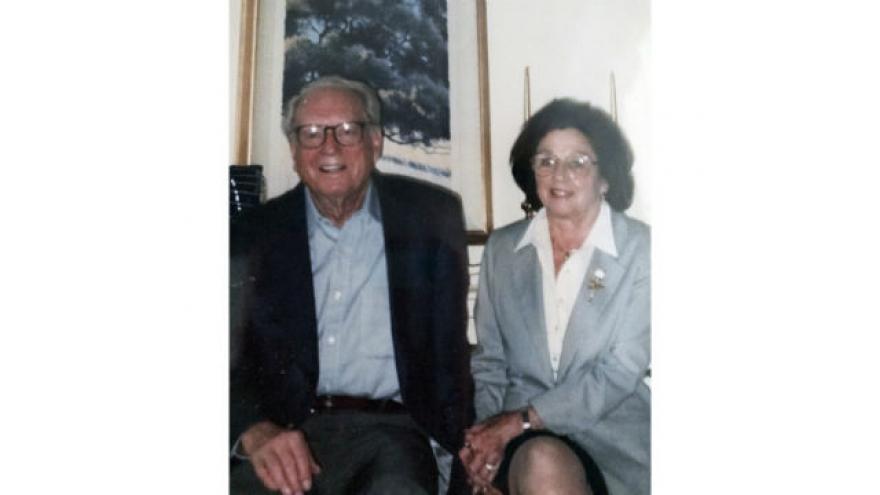 This undated photo of Charles and Sara Rippey was provided by their son Michael Rippey. The couple\'s bodies were found Monday, October 9, 2017. Photo courtesy Michael Rippey via AP

(CNN) -- Nothing could separate Charles and Sara Rippey. Not war. Not even a deadly California wildfire that engulfed their house.

They spent 89 years together, including their final moments in their Napa home, son Mike Rippey told CNN affiliate KPIX. Charles was 100; Sara was 98.

The couple's children marveled at their parents' longevity, both in life and in marriage.

"We often talked among ourselves about how either one of them would deal with life without the other," Mike Rippey told KPIX. "Especially my father. He loved my mother."

Charles and Sara Rippey were among the 21 people killed by California's raging wildfires, which are still roaring across the state with no end in sight.

In many areas, the smoke is thick and the sky is orange. And the families of more than 500 people are still searching for their missing loved ones.

Here's what we know about some of the victims and those still missing:

The Rippeys' love affair started early -- Charles was in the sixth grade, and Sara was in the fourth grade, their son Mike said.

After Charles went to fight in World War II, he returned and had five children with his beloved, Mike Rippey told KPIX. They recently celebrated their 75th wedding anniversary.

Mike Rippey said he believes his father died trying to save his mother. Charles Rippey's body was found in the charred remains of the hallway just outside where his wife was sleeping.

"From where they found his body, he was trying to get from his room to her room," he said. "He never made it. Even if he had gotten there, he wouldn't have been able to get her out. ... And there is no way he would have left."

Christina Hanson saw the flames coming from afar. But the 28-year-old, who lived in an apartment next to her father's house in Santa Rosa, used a wheelchair.

Hanson first tried to reach her father, but to no avail, her aunt Cathy Riordan said. She then called her father's ex-wife, saying she saw an inferno and was scared.

Concerned neighbors told the family they called 911 to the property, but it's unclear what happened after those calls, Riordan said.

After a day of panic and uncertainty, Christina's cousin confirmed she had died.

"Sadly, we just found out that Christina did not survive the fire," cousin Brittney Vinculado said Wednesday.

Hanson's father, 55-year-old Michael Hanson, suffered third-degree burns on over half his body and was at Sutter Santa Rosa Regional Hospital before it was evacuated, Riordan said. He was in a medically induced coma.

Sutter tried to transfer him by helicopter to San Francisco for treatment, but smoke prevented the chopper from taking off, Riordan said. Instead, he was transferred by ambulance.

Riordan said she believes her brother was injured trying to help his daughter.

The loved ones still missing

More than 600 people have been reported missing, but 315 of them have been located, authorities said. Spotty cellphone service has severely hampered relatives' ability to connect. Sonoma County deputies continue to search for 285 missing people, officials said.

The situation could worsen, as firefighters keep battling 22 wildfires that have already scorched 170,000 acres.

The Red Cross has a website where residents can mark themselves safe and relatives can search for their loved ones. Sonoma County officials said those needing to report a missing person can call 707-565-3856.

Southard, 29, lives with his father in Santa Rosa, California, but he attended a wedding nearly three hours away in Monterey on Sunday while his father stayed home.

"I had been texting him that day at the wedding. I told him I'd call him that night. And then he never called me back," Southard said, crying. "He texted me at midnight and asked if I was having fun at the wedding. I guess the fire came an hour or two after that."

Southard said the family reported his father missing on Monday.

When Derek got back to Santa Rosa on Monday, the neighborhood was still closed off. He called the sheriff and asked him to check on his father.

"The sheriff said his house was burned to the ground and his car was melted in the driveway, but I've still got my fingers crossed that he made it out somehow," Southard wrote Tuesday on Facebook.

Their next-door neighbors barely escaped the flames but they didn't have time to knock on his father's door, Southard said.

"As they were leaving, people were driving by and honking horns to try and wake people up," said Southard, who is staying with his girlfriend's family in San Francisco.

But Southard worries his father, who has trouble sleeping and takes sleeping pills, didn't hear the commotion. "He's 71 and pretty hard of hearing," he said.

Sobbing, Southard said: "I lost everything. My dad, my car and my dog and everything around."

Rachael Ingram last heard from her close friend, Mike Grabow, late Sunday night when he told her the air was smoky as he drove to his Santa Rosa home.

She and Grabow, 40, had been at the Cooperage Brewing Company in Santa Rosa, where she is a bartender. The pair, friends for more than eight years, had been looking at maps of where the wildfires were before Grabow left to drive home.

Ingram wrote on Facebook that she checked hospitals and the Red Cross shelter database, and listed Grabow with the fire department and sheriff's hotline.

"We have a pretty solid core group of friends that have been looking for him," she said. "If he didn't show up at any of our houses,that's an immediate red flag for us. I called his brother first and alerted him and asked him to help," she said.

The brother went to Grabow's home on Monday and discovered the blaze had destroyed the home. The fire had melted the glass on Grabow's truck, Ingram said.

"He has tons of family in Idaho that are really worried about him, as well as family in Washington. I want to acknowledge what they're going through," Ingram said.

"They're absolutely terrified and we're trying to help them," she added.