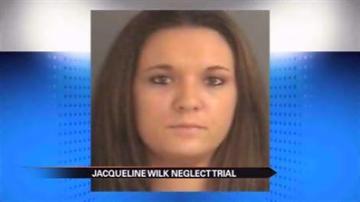 SOUTH BEND, Ind. – In the fourth day of the neglect trial of Jacqueline Wilk, the defendant took the stand in her own defense. After Wilk's testimony, jurors began deliberations.

Wilk talked about the day her sons, Dominic and Isaac, were found dead in her car trunk.

Wilk testified that she is a high school graduate and was going to school to be a dental assistant in June 2011.

She said she would go to school around 4:30 p.m. and would get home around 11:30 p.m. Her stepfather watched the boys while she was at school.

Dominic, she said, was advanced. He was one of the most advanced students in his class and was a “grandma’s boy.”

Isaac was very shy and didn’t open up to anyone. She described him as a “mamma’s boy.”

The two boys began hiding as soon as Isaac learned how to walk, Wilk testified.

She said she didn’t discourage them because she thought they were just having fun.

New Carlisle, where the incident happened, she said is a safe and friendly community where she felt safe.

She said they kept the house locked, but didn’t lock the car because she didn’t feel she needed to, Wilk testified.

The defense asked her about the locks on the doors to the house and whether the boys ever went outside on their own.

She testified the boys did not know how to get out the back door, but Dominick did know how to open the front door if it was locked. There were two locks within Dominick’s reach.

She also testified the boys were warned “plenty of times” that they were not to go out outside unsupervised.

The night before the incident, Wilk said she got home, played with the boys a little bit and they watched television. The boys went to bed about half an hour before she did around 4 a.m..

The next morning she said Dominick was up and Isaac was asleep in his room. She says normally her mother would turn on cartoons for Dominick to watch on his own, but that he never went outside.

Wilk said, “I was on my phone, not studying, but skimming through my radiology book,” and was also on Facebook.

She said it was possible she fell asleep that morning, “But I don’t believe it was that long,” she testified.

Before her friend texted her at 2:04 p.m., Wilk said Dominick told her he was going to grandma’s room to watch TV and Isaac followed him.

She heard the TV on – and this was about 20 to 25 minutes before she texted her friend back.

After she sent the text at 2:04 p.m., she said she went upstairs looking for the boys.

She said she didn’t panic when she didn’t find them in the room watching TV. She thought they were hiding from her.

She went back downstairs to look for them, but didn’t find them there either.

She said she went outside and called their names and looked everywhere around the house.

"Isaac’s eyes were still open and Dominick was coughing and choking," Wilk said.

She brought the kids inside, put them on the floor and called for help.

“I tried to save them but I couldn’t. A neighbor, who works for EMS, heard the call on the radio and came to the house to help."

Isaac ended up dying upon arrival at the hospital but she spent the night in the hospital with 4 year old Dominick as he was fighting for his life. She said as he was dying she OKed the medical staff to give him CPR for close to 2 hours, but his heart wouldn’t restart.

She said she laid with him and held him in the hospital until his face turned purple. She said they had to pry her off of him, then took her to the ER and gave her some  medicine.

Wilk testified the medicine had an effect on her.

“It made me very calm and made me make weird movements,” she said. “I was confused and I couldn't’t understand.”

When she went to the St. Joseph County Metro Homicide Unit for a police interview the following Tuesday. During that interview she realized she moved her hands a lot and said inaccurate things.

When she was cross-examined by the prosecutor, he asked her what she was doing in the 20 to 25 minutes she didn’t hear the children on that day until she went looking for them.

She said she was probably on her phone in her bed downstairs.

She said it was common for her to stay in bed after her mother left for work.

When asked why it took her close to an hour to respond to a text she received at 1:09 p.m she said she didn’t remember if she responded right when she saw it at 2:04 p.m. or not because sometimes she responds right away to texts and other times she doesn’t.

She agreed with Deputy Prosecutor Mark Roule that many of the things she said during the recorded police interview were accurate.

After Wilk's testimony, the state and defense presented their closing arguments.

The state says the boys opened the trunk and got in it on June 17th, 2011 because they had done so numerous times before. The state also said that she had the power to eliminate that danger if she had kept her eyes on the children and kept her car doors looked.

The defense said the state did not prove that Wilk is guilty beyond a reasonable doubt.

After the state and defense concluded their cases, the jury began deliberations to determine if Wilk knowingly put her children in a dangerous situation. They began deliberations just before 2 p.m. Thursday and came back around 6 p.m. stating they were down with deliberations and could not in anyway reach a verdict. Shortly after Judge John Marnocha declared a mistrial. The case may be retried. The Judge said he will meet with the attorneys on the 25th of this month.