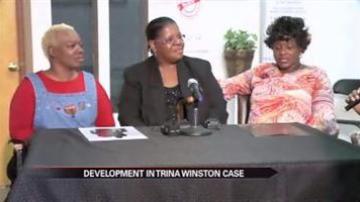 MISHAWAKA, Ind. -- The family of Trina Winston held a press conference Thursday to talk about the discovery of her body. Although the body hasn’t been positively identified, it is believed the body is Trina’s.

Trina’s estranged husband, Tarrence Lee, has been charged in her murder.

Now that her body may have been found, family members want to know who let the man accused of killing her out of prison – and why law enforcement didn’t do more when the abuse was reported.

On the radio, Trina’s sisters discussed how her body was found and what it meant to the family. They also talked about their disappointment Lee was out of prison.

Her sisters said what bothered them most is that Lee had hurt their sister before and law enforcement were told about it.

"The police were called. It went through the prosecutor's office, they knew Terrence Lee, they been knowing Terrence Lee, they know what he is capable of,"  said Traci Winston, Trina’s sister. "So in that case where everything being lined up and they saying, 'Well she didn't cooperate.' If the calls were made, they should have picked him up. That's all they had to do. Just talk to him, maybe. We did everything.

Winston's sisters said they want to turn this tragedy into a positive and are working with local organizations and political leaders to make changes to laws and educate people on what to do if they find themselves in a domestic abuse situation.