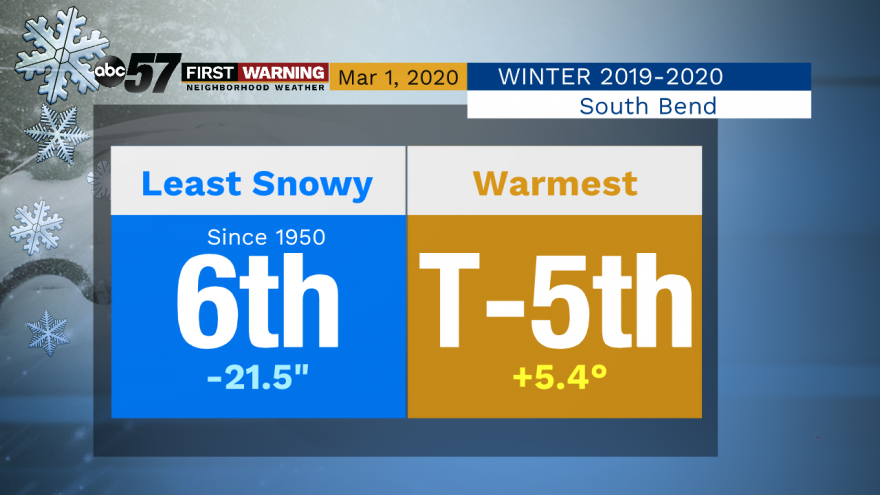 There were more cloudy days than sunny. 2020 started off with the 2nd wettest January on record. The lack of snow for the entire season ranked South Bend as the 6th least snowy winter on record. Last fall, the ABC 57 First Warning Neighborhood Weather team predicted a “very cold or very mild season.” Whether you wanted a lot of snow or a little, this article is a recap of the records we set and statistics of note from December 1st through February 29th. 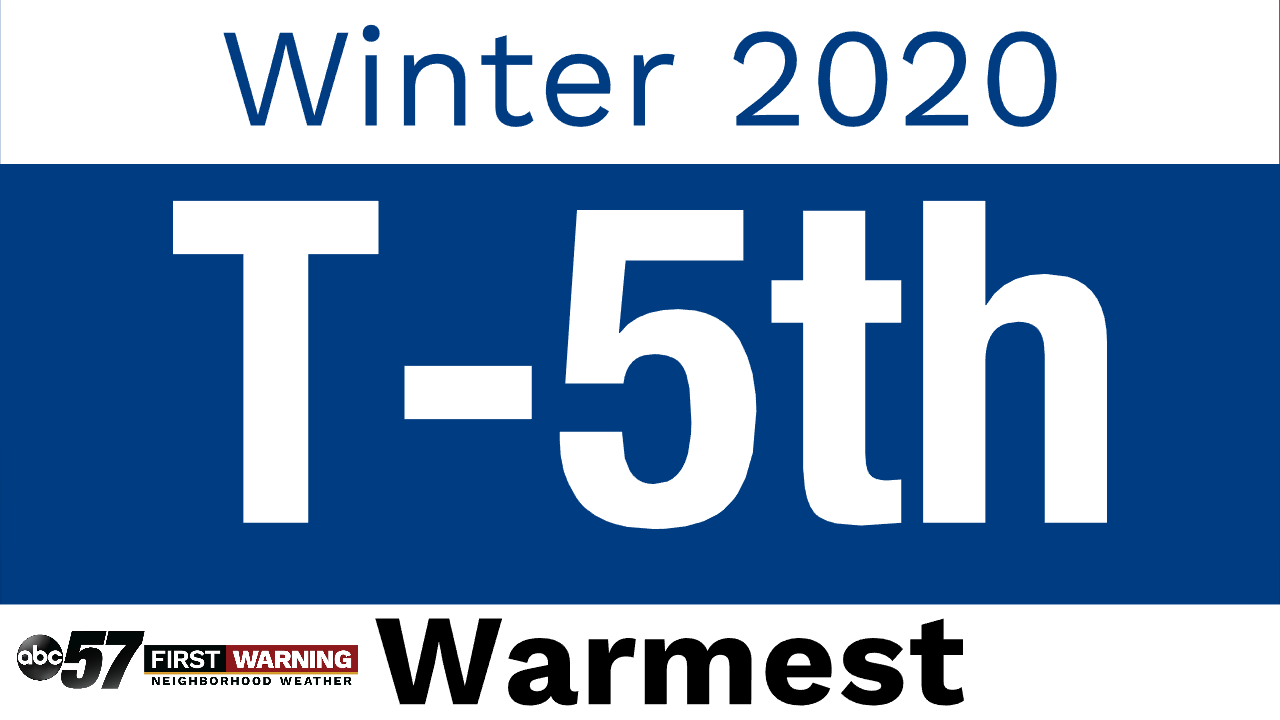 In January, 27 days had temperatures above normal. 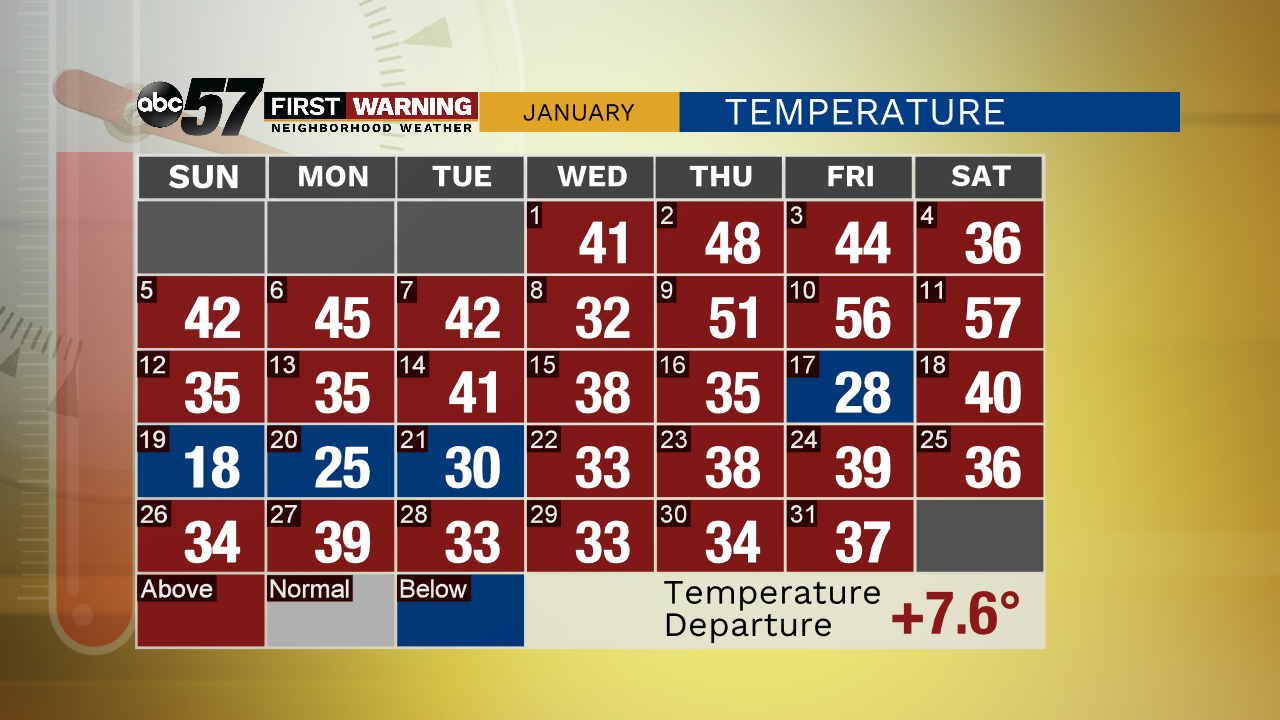 In February, there were 17 days with temperatures above normal. 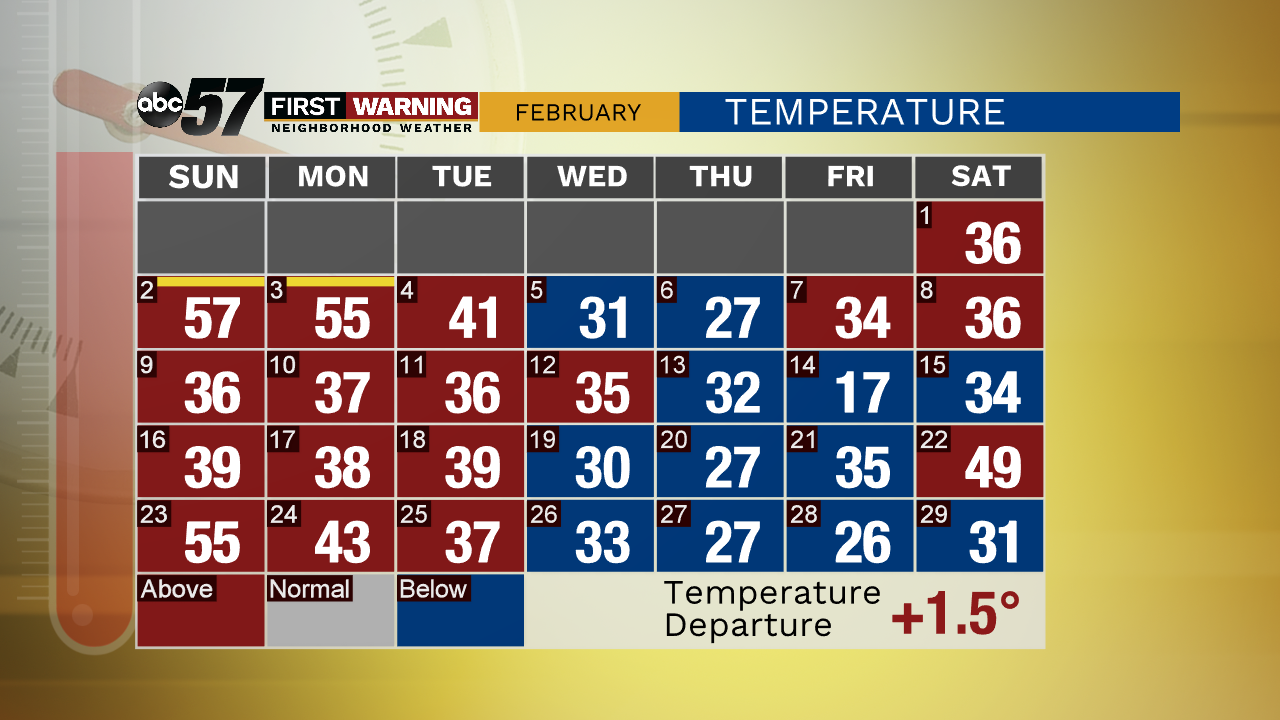 There were not very many days with temperatures below normal, let alone a streak of days with temperatures below normal. These consecutive days below normal make a cold snap. In the past, the longest cold snaps in South Bend could last around ten days long. This winter proved cold snaps are getting shorter in South Bend. On average, they are about four days shorter. Our longest cold snap this winter was just four days long. This trend reflects our mild 2020 temperatures. Temperatures did not fall below zero degrees at all this winter. As the climate continues to warm, winters like 2020 are more likely. 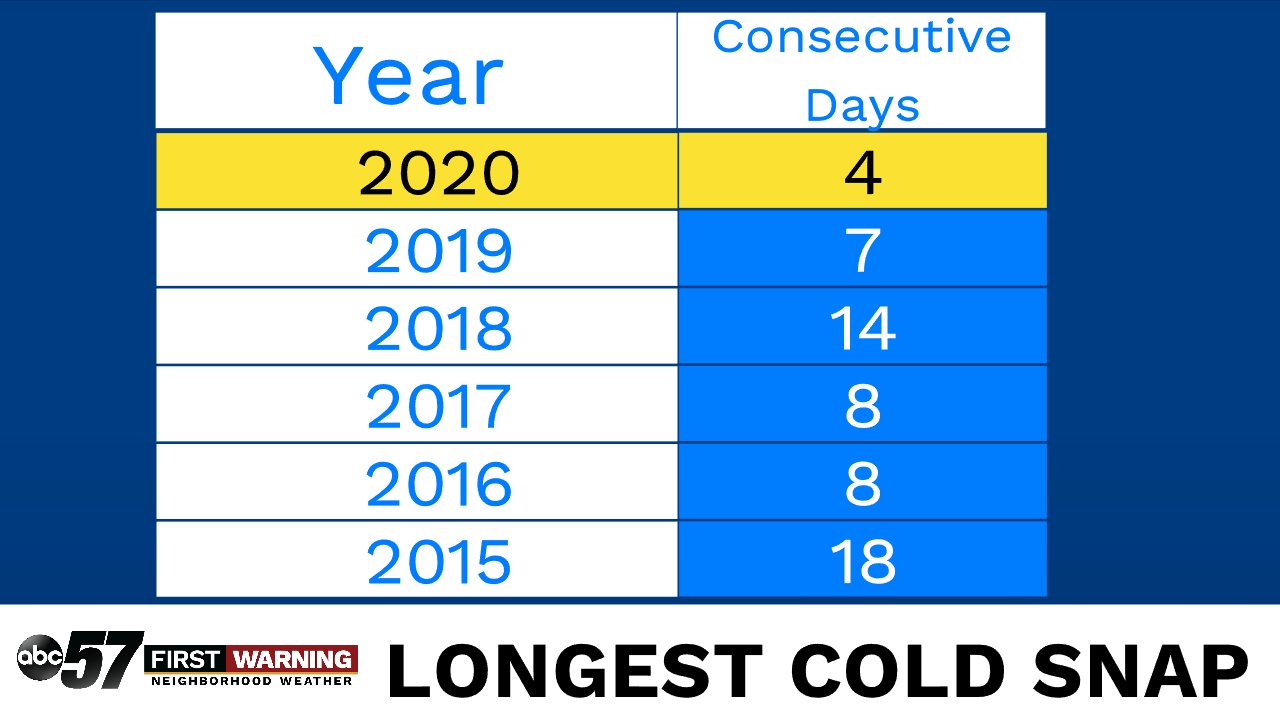 Although January was the second wettest opening month of the year on record, almost none of this precipitation fell as snow. When looking at snowfall rankings, we only include years since 1950. We use snowfall data only dating back as far as 1950 for a few reasons. Years before this are often missing several daily values. Additionally, snowfall measurements were standardized nationwide starting around 1950. The final ranking for this winter is that we were the 6th least snowy winter on record, with a total of 31.4 inches of snow. 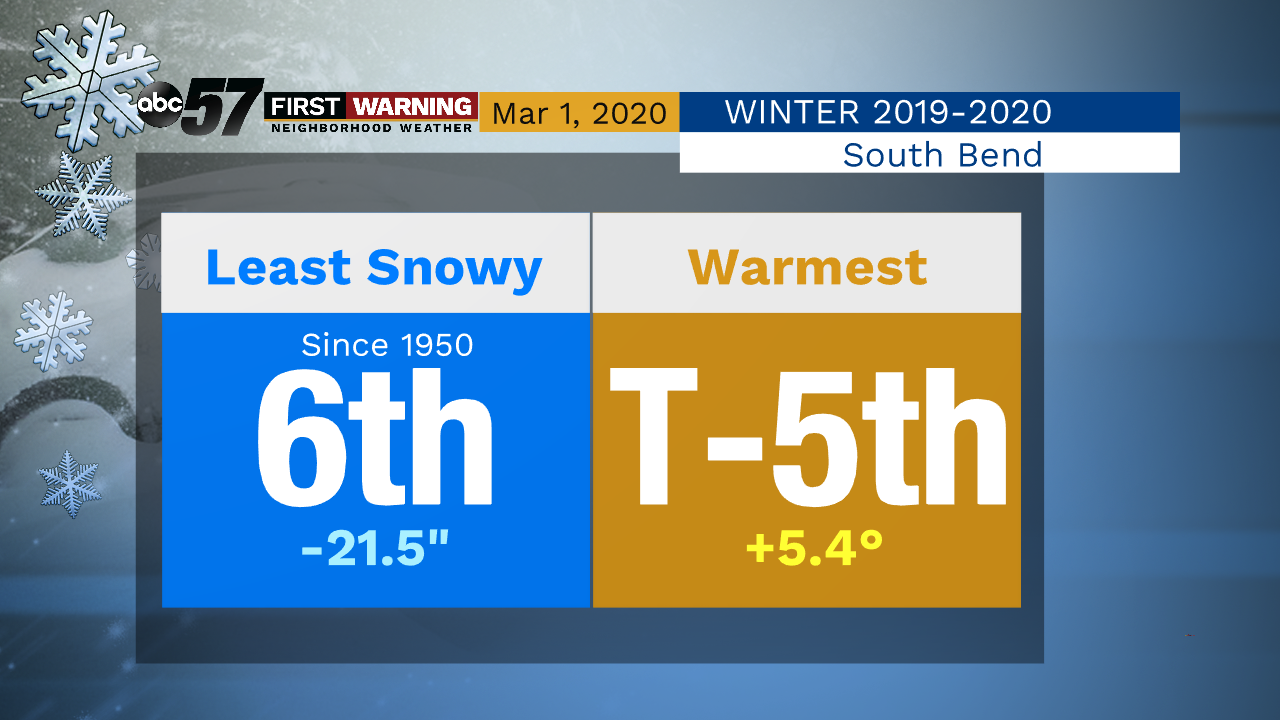 Within the past twenty years, South Bend winters have gotten slightly warmer and less snowy. The winter mean temperature from 1900-2000 is 26.5 degrees. From 2000-2020, the value warmed to 27.3 degrees. Although this value doesn’t seem significantly warmer, it is proof of our warming trend in the last twenty years.

Lake Michigan set some records this winter as well. Water levels this January were the highest ever for the month. Higher water levels contribute to erosion and shrinking shoreline. Additionally, ice cover on all of the Great Lakes was much lower than average. During what would normally be the peak ice cover period, Lake Michigan was only 15% covered with ice. 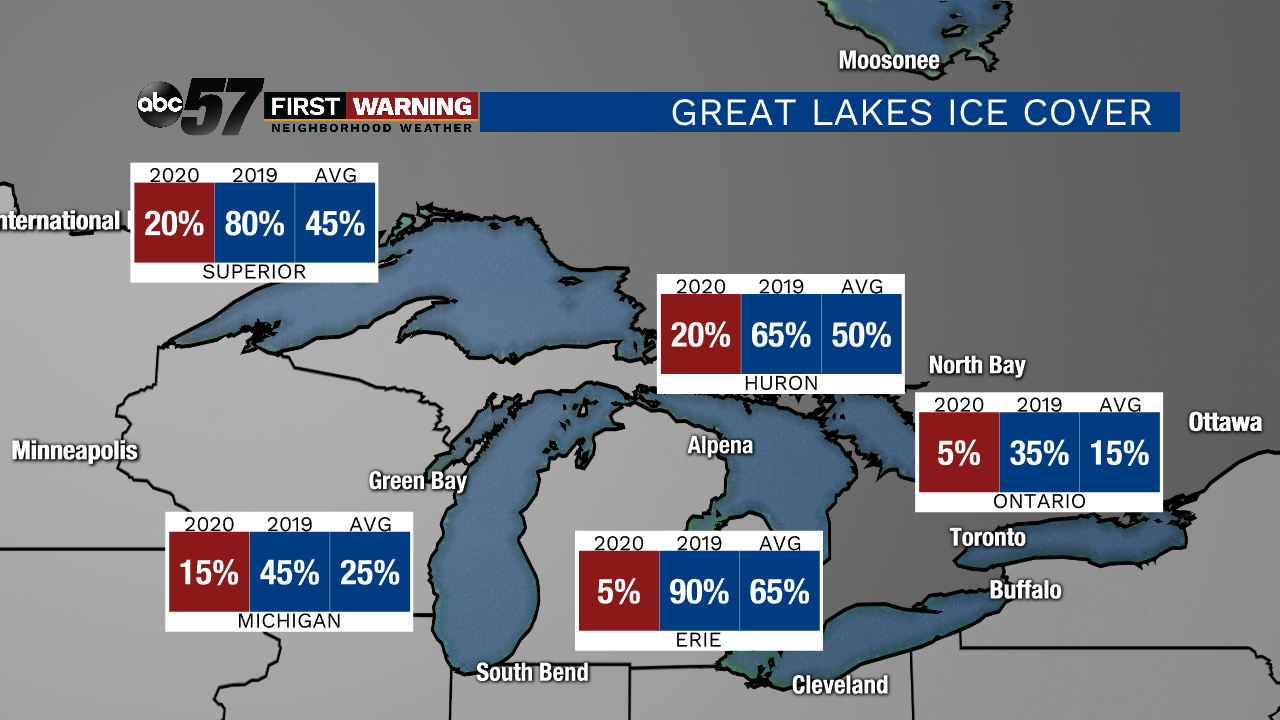 Winter in Michiana isn’t known for sunshine, but for many this winter seemed to feel extra cloudy. By the first week in February, there had only been five total days of sunshine in 2020. By the end of February, we did end up with the normal amount of sunshine days for January and February. Why is it that we seemed to be lacking so much sun? It might be because we did not have much of a sunny streak this winter. The cloudiest months of the year are January and February, and for 2020, that trend continued. Our sunshine increased by the end of February, with South Bend recording it's longest streak of sunshine at five days long. 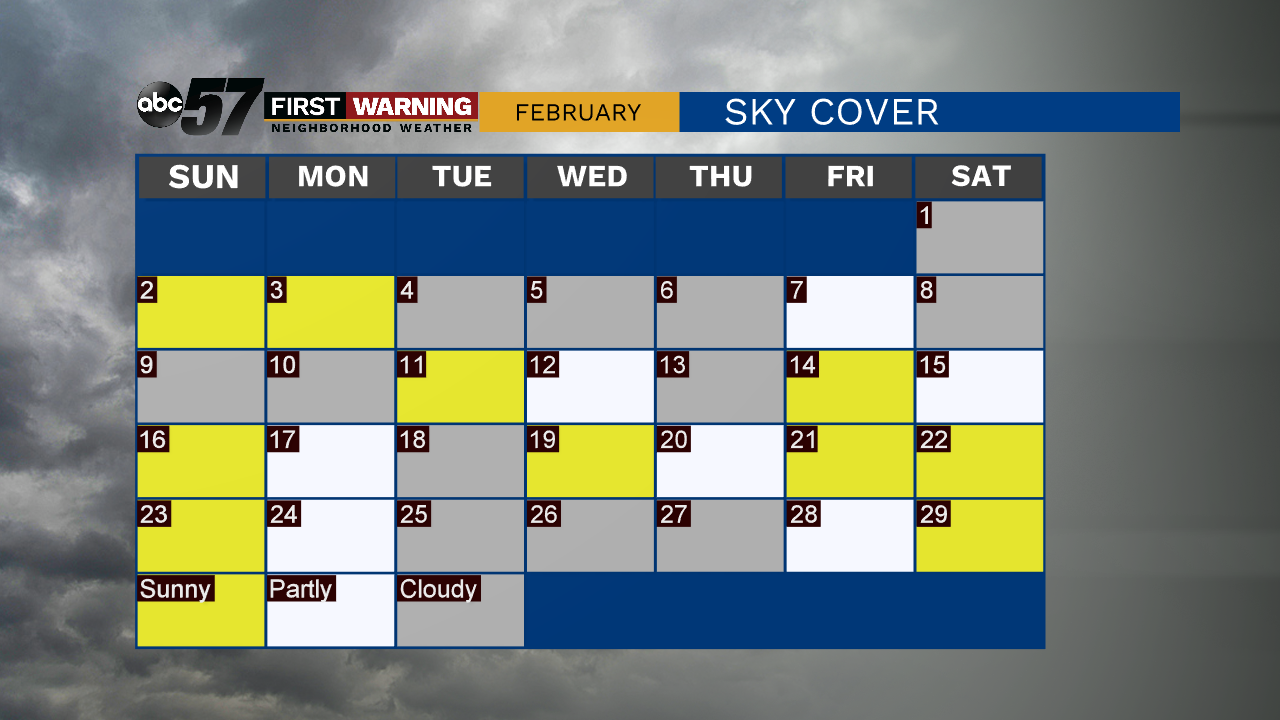 Winter 2019-2020 will be remembered as a very warm season, where South Bend missed out on nearly two feet of the typical wintertime snow. Cold snaps and sunny streaks were hard to come by. Very high water levels and low ice cover on Lake Michigan contributed to numerous beach erosion events.

Contributions to this story also made by: David Caulfield
Share this article: