With a pause to pray, rescuers retrieve last of 6 killed in bridge collapse 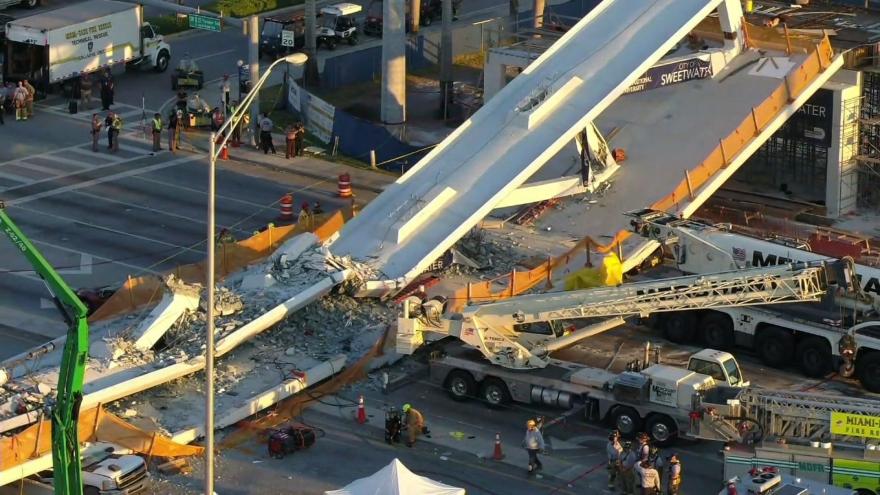 (CNN) -- After days of digging through 950 tons of steel and concrete, authorities say the remains of all six victims of the pedestrian bridge collapse in Florida have been recovered.

Rescuers have worked day and night to extract the victims and mangled cars after the pedestrian bridge crumbled Thursday west of downtown Miami.

"I believe that is the final count," Miami-Dade County Police Director Juan Perez said. "This ends with a tragedy of six. ... We are pretty confident that no one is left."

For the first time since the bridge collapsed, rescuers took a break Saturday to pay tribute to the people killed.

"We asked them to pause so we could pray over every victim," Perez said.

A police motorcade escorted the remains of five victims to the medical examiner's office. A sixth person died at the hospital.

Miami-Dade police have identified five of the people killed in the collapse of the bridge, which was meant to connect the campus of Florida International University with a neighborhood that's home to 4,000 of its students.

Alexa Duran, a Florida International student, was in a gray Toyota 4Runner that was extracted from underneath the rubble on Saturday afternoon. The 18-year-old was driving under the bridge Thursday when it came crashing down, and a friend traveling with Duran tried to pull her out but was unsuccessful.

"My little girl was trapped in the car and couldn't get out," her father, Orlando Duran, told El Nuevo Herald, a sister newspaper to The Miami Herald.

She graduated from Archbishop McCarthy High School in Southwest Ranches, Florida, in 2017, the school said on Facebook.

Ecaudorian Foreign Minister Maria Fernanda Espinosa said on Twitter that Duran's father was Ecuadorian and that the country's Consulate is working to learn more about the accident and provide assistance to the family.

Alexa Duran's sister, Dina, posted a tribute on Instagram. "Rest In Peace my sweet little sister. Words cannot describe how heavy my heart is. I would give anything to take your place and all of your pain," she said.

Brandon Brownfield was killed in the bridge collapse, according to his wife, Chelsea Brownfield. She has been waiting for confirmation since Thursday, but posted on Facebook on Sunday morning that he was killed.

Brownfield was a crane technician for Maxim Crane, but he was not working on the bridge. In a Facebook post, Chelsea Brownfield said they had been married for almost 4 years and have three girls.

"Please keep us in your prayers, as I now have to find the words and the answers to tell my girls that their Daddy is not coming home," she wrote.

Navarro Brown, 37, was working on-site at the bridge for Structural Technologies VSL, a company that specializes in bridge cable tension and construction systems, the company told CNN affiliate WTVJ. After the bridge collapsed, he was taken to a hospital and died there, police said.

Rolando Fraga Hernandez was identified as the victim inside a gold Jeep Cherokee that was removed from underneath the debris on Saturday morning, police said.

Oswald Gonzalez, 57; and Alberto Arias, 53, were pulled from the rubble from a white Chevy truck on Saturday, authorities said.

A National Transportation Safety Board investigation will continue for several months. It will "pinpoint where was the mistake and/or the failure that led to this catastrophic event," Florida Republican Sen. Marco Rubio said.

"And that is something that the community needs, the families need, the country needs to make sure it never happens again," Rubio told reporters.

The bridge was supposed to enhance safety and keep pedestrians safe from traffic on busy Southwest Eighth Street, where a vehicle fatally struck an FIU student in August. It was scheduled to open for foot traffic next year.

Rubio said the technology was faster but not "in the sense of cutting corners."

FlU President Mark B. Rosenberg said the university is fully cooperating with authorities investigating the collapse.

"Even as we grieve, we all have an interest in getting to the bottom of what happened," he said in a statement.

The university will host a moment of silence at 1:47 p.m. when classes resume Monday.

"It will take time for our community to heal," Rosenberg said.

The university's Student Government Association will hold a vigil for the victims Wednesday morning at a campus facility.

Engineers had discussed the structural integrity of the span and deemed it safe just a few hours before it collapsed.

"The FIGG engineer of record delivered a technical presentation regarding the crack and concluded that there were no safety concerns and the crack did not compromise the structural integrity of the bridge," Florida International University officials said Saturday in a statement.

Before that meeting, an engineer for FIGG had called a FDOT employee to discuss the cracking, but his call went unanswered.

"We've taken a look at it and obviously some repairs or whatever will have to be done," W. Denney Pate said in a voicemail that was unheard until Friday.

Robert Accetta of the National Transportation Safety Board said a crack in the bridge "does not necessarily mean that it is unsafe."