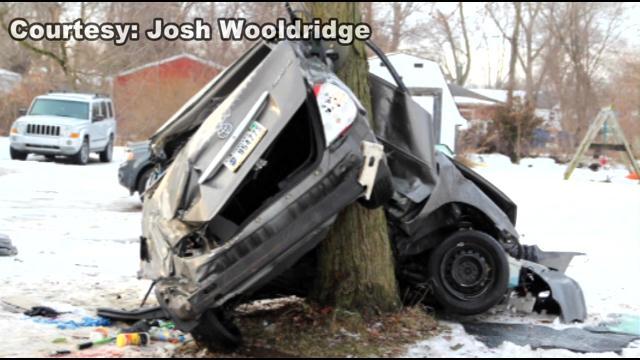 Police have released new details in a fatal crash that happened Sunday morning in Elkhart.

Timofey Karas, 21, of Goshen was driving the car when it struck a tree on County Road 20 just west of Kreighbaum just before 5 a.m.

"It was a loud crash, I woke up because I thought it was just a dream,” said Josh Wooldridge, a witness to the accident. “I started closing my eyes then my dad banged on my door and said somebody crashed into the tree and we might need to go help them."

Wooldridge and his dad called 9-1-1 after seeing the accident that unfolded in their front yard.

"I went outside and you couldn't really tell what it was, but you could tell it was bad," said Wooldridge.

Police reports reveal that Sharun was pronounced dead at the scene after being extracted from the vehicle.

"I heard a squeal of tires, metal clanging, a wishy sound and a big thud," said Angel Sanchez Mendez.

"Half of my fence was laid down, and I walked over there to the neighbor's driveway and I realized that it wasn't like a little bulldozer or a tiny 3-wheeler, it was a scrunched car,” said Sanchez Mendez. “There was a gentleman hanging out of the windshield."

Sanchez Mendez says she's can't get the gruesome image out of her head.

"I can't sleep, when I blink or close my eyes cause I'm tired and I keep seeing the gentleman," said Sanchez Mendez.

The crash is still under investigation by the Elkhart County Sheriff's Department.
Share this article: