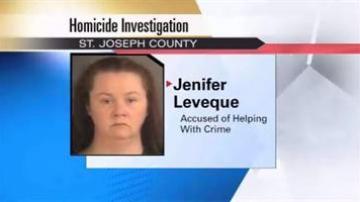 ST. JOSEPH COUNTY, Ind. -- A woman accused of assisting a criminal and transferring a handgun to a felon pleaded guilty to both charges in court Tuesday. Jenifer Leveque was charged on June 2, 2012 in connection with the double homicide of Matthew and Lisa Clippinger.

The Clippingers were murdered in the early morning hours of June 2, 2012. Steven Clippinger is accused of killing his brother and sister in law.

Steven Clippinger is scheduled to go to trial on September 29, 2014 on two counts of murder and one count of serious violent felon in possession of a firearm.