Woman attacked by shark in Hawaii 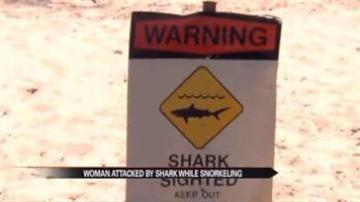 MAUI, Hawaii — A frightening scene unfolded near a beach in Hawaii. A woman says a shark came out nowhere and attacked her.

It happened while she was snorkeling on vacation in Maui, Wednesday morning.

The woman says she was about 30 feet from the shore in about 10 feet of water when the shark hit her hard.

"It happened so fast that I didn't see him coming. I didn't see it going," said Evonne Cashman. "The doctor in the ER says according to the bites and where they are, it probably was about a 25-foot shark. That was his guess."

She says the shark let go right away. And she ran to the beach screaming for help.

The woman is expected to be okay.