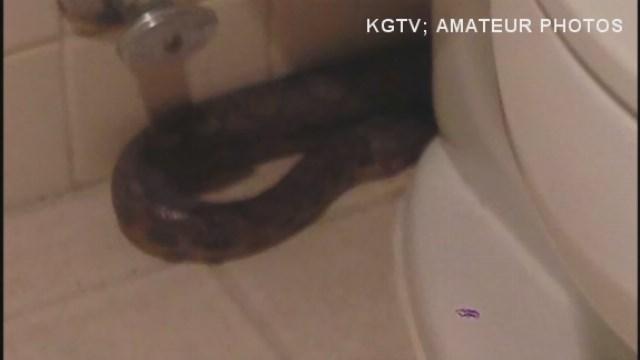 The co-founders of a PR and marketing firm in San Diego got quite a surprise at work Wednesday. A five foot long snake crawled out of their toilet.

The firm is headquartered in the old San Diego City Hall.

Stephanie Lacsa said she went into the restroom and noticed the water level was higher than normal, so she grabbed a plunger.

“I noticed that something's coming out,” said Lacsa. “I saw the flicker of the snake's tongue. As soon as I realized that that was a snake, I booked it out of there, plunger still in hand, and screamed all the way to my desk.”

Lacsa told her partner about what was happening.

“I absolutely didn't believe her,” said Holly Wells. “I went to the bathroom.”

“I'm like, ‘I'm not going anywhere near that bathroom but you need to see how big this snake is!'” said Lacsa.

“So I inched it open, inch by inch, and then I saw the snake's head and it was huge,” said Wells.

They took pictures of the snake coiled behind the toilet.

“Shut the door, taped it shut, and then screamed and ran and sat on my desk and Stephanie had her feet up on the desk,” said Wells.

The ladies have been scarred for life.

“I mean, it's not just this toilet. It's going to be every bathroom experience probably for the rest of my life,” said Wells.