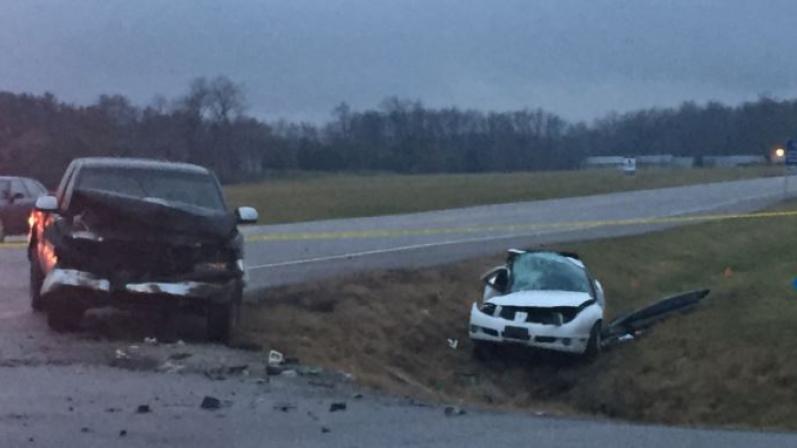 The victim’s family said they are in shock and trying to come to terms with their grief.

24-year-old Airiel Burnau was getting ready to marry the love of her life, 29-year-old Nathan Thews, when her life ended tragically this morning in a car crash on County Road 17 in Elkhart County.

Burnau grew up in Sturgis, Michigan and was the passenger of the Pontiac that looked like a mangled mess in a ditch at the corner of County Road 6.

Her fiance, Nathan Thews, was driving the Pontiac and he survived but is suffering from serious injuries.

Police said the Pontiac was T-boned by 20-year-old Joseph Jasper who was driving a Chevy Silverado truck.

Casey Lehman said, “It looks like the light may have turned yellow for the intersection and then at that point the driver of the (pontiac) sunfire made a left turn into the path of the pick-up truck.”

Lt. Lehman was on scene collecting evidence and the road was shut down for several hours.

Lehman said, “The driver of the pick-up truck was not injured. We are doing toxicology on all the drivers involved in the crash.”

Preliminary reports reveal that Jasper did not yield to the traffic that had the right of way.

And now the family of Airiel Burnau will be laying her to rest instead of celebrating with her this Christmas.

The Elkhart County Sheriffs Department is still investigating and no arrests or citations have been made.