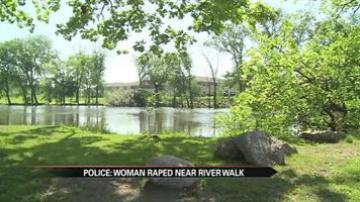 SOUTH BEND, Ind. -- South Bend Police are searching for a man who raped a woman in the parking lot of Veteran's Memorial Park Thursday night.

"I can't imagine, going through that. I don't know, it's just scary," said Monica Briano.

Police say around 9:30 p.m. Thursday, a woman parked her car at Veteran's Memorial Park and went for a walk out on the Riverwalk.

When she got back to her car, she was confronted by a man who then raped her in the parking lot.

"I think it could happen to anyone. You just never know," said Briano.

Briano, an IUSB student, says she runs the path all the time, sometimes after dark.

Briano says she was shocked when she got the crime alert from IUSB Police.

She says she's never felt unsafe at the Riverwalk.

"It's a really nice place to walk or run, you wouldn't think of anything like that to happen," said Briano.

But now they say a solo workout on the Riverwalk isn't worth it.

Police say the man they are looking for is in his 40s, is over 6 feet tall and over 300 pounds, with a military style haircut and glasses. He is believed to be driving a gold Mercury Sable.