Woman survives in the wilderness on tomatoes 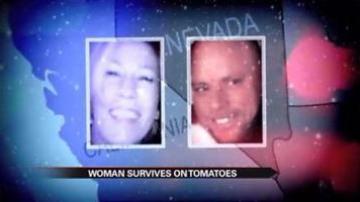 NEAR CARSON CITY, Nev. -- A woman managed to survive nearly a week in the snow covered Sierra Nevada Mountains on nothing more than tomatoes and snow. Her boyfriend wasn't so lucky.

The two were in an area so remote there was no cell service.

While driving in the mountains their jeep got stuck. The boyfriend left to get help and was later found dead.

Crews searched for 46-year-old Paula Lane and it was her brother who found her.

She had been hiding out in a hollowed out tree with a blanket and the tomatoes.

"I gave her the biggest kiss that I could, without hurting her," said Linda Hathaway, Paula's older sister.

Doctors say she is recovering nicely.