Women given insulting check in California 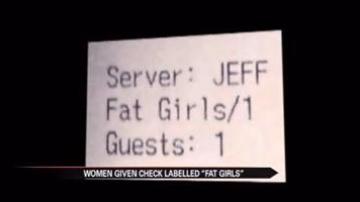 STOCKTON, Calif. -- People are often outraged with what they might see when a waiter brings back a check but three women in California were actually offended by what they got.

Three friends were enjoying their evening at a casino restaurant and when the waiter dropped off the check it said "fat girls."

When the server returned he denied having anything to do with it. He explained that "Jeff" the name on the receipt must have been the one who typed the words into the system but Jeff was gone so the three demanded to see a manager.

"He had like a smirk on his face, like it was funny, but he was trying not to laugh," said Christina Huerta.

"It's not funny. I can just see it over and over again, and I still can't believe it. They labeled us 'fat girls.' It's just something we got to deal with," said Isabel Robles.

Other management said "Jeff" was suspended as they continue to investigate what happened.