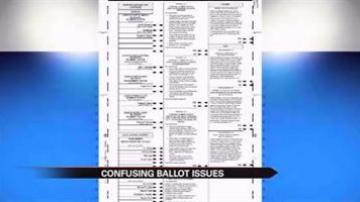 Each Election Day, voters must decide not only who to elect for office, but must make decisions on local government proposals. Benton Harbor has two of the most confusing questions of any ballot in Michiana.

Even the clerk's office in Berrien County admitted they need some explanation.
We took Benton Harbor's ballot to the streets to figure out what people think about it.

Lonnie Booth was just as confused as we were when we first laid eyes on it.

"It's very confusing to me. It really is,” said Booth.

Benton Harbor’s ballot asks its voters to fund two different measures that are actually renewals of funding for the city.

One has a minor increase that represents more than a million dollars in the city’s general fund.

Mayor Hightower said it is extremely important for the city’s financial future.

But by reading the ballot, he's more likely to vote the other way.

Shall the limitation on the amount of taxes which may be imposed on taxable property in the City of Benton Harbor, County of Berrien, be increased by 2.0694 mills ($2.0694 dollars per thousand dollars of taxable value) as new additional millage in excess of the limitation imposed by Michigan Compiled Laws section 211.34d, to restore City Charter millage authorization previously approved by the electors as reduced by operation of the Headlee amendment, to provide funds for general operating purposes?