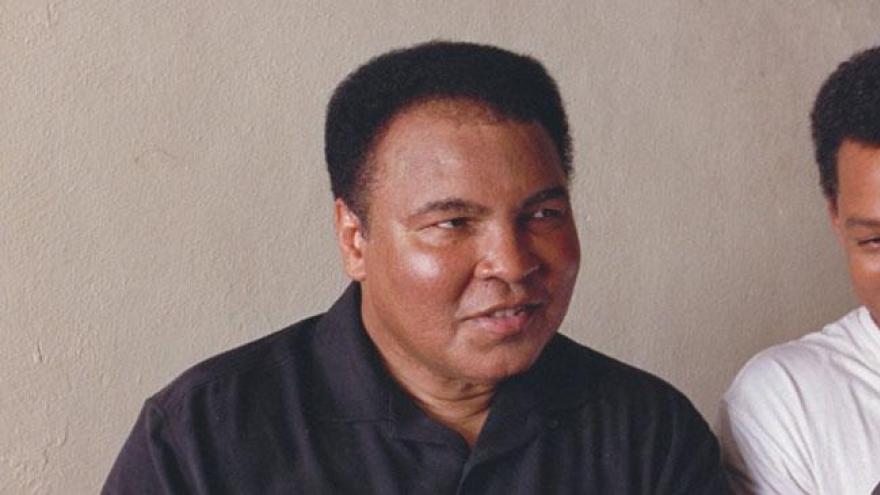 (CNN) -- In the end, it was Ali himself who planned his own funeral.

True to his giant character, he wanted it as open as possible -- with a chance for his fans to say goodbye. Three days of funeral proceedings began Wednesday with a downtown festival called "I Am Ali," in his hometown of Louisville, KY, and continued Thursday with a public Muslim service at the city's Expo center.

Thousands of free tickets were made available to his fans to pay their respects during Thursday's service -- a brief program of prayer, called a jenazah.

Addressing a large crowd, many of whom wore kufis or hijabs, speakers spoke of Ali's dignity, courage, wit and selflessness. Scholar Sherman Jackson said Ali did more than any sheik, theologian or imam to normalize Islam in the U.S.

And rather than lash out at the racism and other tribulations he faced in life, Ali responded with "nothing but bigness of heart and graciousness of spirit," said Jackson, a professor of religion and American studies and ethnicity at the University of Southern California.

"The passing of Muhammad Ali has made us all feel a little more alone in the world. ... It has brought us a nagging sense of sadness," he said, wondering aloud "if God will ever grace us again with anything that comes anywhere close to the majesty that was Muhammad Ali."

Fans of the Champ don't come bigger than Louisvillians -- people in the northern Kentucky city revere him.

"He was the greatest," Jeffrey Mitchell, 50, said Wednesday at the festival.

"He was the most recognizable face in the world, regardless of sports. All over the world he was known, so that meant a lot to the city."

The city has already started embracing its most famous son's legacy, celebrating the three-time World champion Wednesday, sharing memories and paying tribute to the man they know as the "Louisville Lip."

People brought flowers and photos to a memorial at the Muhammad Ali Center and left tributes on a wall at the the Kentucky Center for Performing Arts.

Thursday's service, one of the most public parts of this very public send-off, was in a fitting location: The Kentucky Expo Center's north wing, with overflow crowd admitted into the center's Freedom Hall -- where Ali defeated Willi Besmanoff on November 29, 1961, his last fight in the city.

A total of 14,000 free tickets were made available on a first come, first service basis, his spokesman Bob Gunnell said.

Authorities are going after ticket scalpers trying to profit off selling funeral tickets, Gunnell said, calling their attempts to cash in "despicable" and "deplorable."

Ali had said it was important that the memorials be conducted in the Muslim tradition, Gunnell said.

Imam Zaid Shakir, a Muslim scholar and co-founder of Zaytuna College in Berkeley, California, led the service. The ceremony was a simple one, and not fundamentally different to the funereal rites of other faiths. At its essence was a prayer of seeking forgiveness for the deceased, showing support to the family, and praying to the prophet Muhammad and Allah.

18,000 people were expected to attend the service and all faiths were welcome, although those who self-identified as Muslims were given priority seating.

Those who couldn't get inside the arena could watch the funeral streamed live on the Muhammad Ali Center's website.

"To be properly prepared for burial, prayed over and then buried is a right owed to every single Muslim," Shakir said in a statement provided by organizers. "If no one fulfills those rights, then the entire community has fallen into sin.

"In the case of someone of Muhammad Ali's stature, to leave any of those rights unfulfilled would be a crime."

Thursday's jenazah will be followed Friday by a morning funeral procession through the streets of Louisville before the public memorial service at the KFC Yum! Center.

"It's a real testament to the power of Muhammad Ali, his message and all he stood for that so many thousands showed up to be able to recognize him," fan Brian Eller told CNN affiliate WAVE-TV, leaving empty-handed after waiting in line for hours for tickets to Friday's service.

Another fan, Jeanne Stone told the TV station she traveled from Rochester, New York, for a chance to attend Friday's memorial service. She said she briefly met Ali, by chance, on a flight a few years ago.

"He came down the aisle of the plane and shone in my mind," she said. "He was like the gift of kindness... You saw this shining soul. It made an imprint on my life."

The death of the boxing icon has resonated around the world, but perhaps no more so than within his own communities: African-Americans and American Muslims.

"As an American, as a African-American, as a Muslim, he really inspired me to fight and to stand for what was right and what was strong," Ayah Kutmah, 18, said on Wednesday at the downtown festival.

"Hearing that he died was awful, it was one of the worst things, because we lost a hero. This was his home, and even though there may have been times when people might not have been the kindest to him here, he still went back to his roots and appreciated his hometown.

He was a hero for all Muslims all around the world. You saw him as a symbol against oppression, against Islamophobia, against people who tried to put him into a small sphere. He was like, 'These are my beliefs, you can take it or you can leave it.' That really inspired us to take a stand. To not hide when times get tough. To show people we shouldn't be ignored."