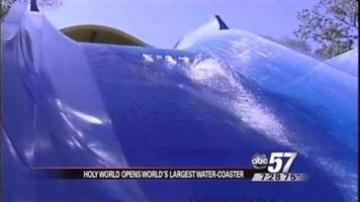 It's called The Mammoth, and it is the World's largest water coaster.

Everything about the ride is mammoth, from the enormous water tubes, to the 1100 riders per hour capacity.

The Mammoth was build after the park realized how much everyone enjoyed their first water coaster.

Dan Koch, President of Holiday World said, "After we built The Wildebeest,we realized it was a huge success, it makes people crazy!"

Koch said the closest thing to The Mammoth on the planet is in The United Arab Emirates and that is only 70 percent as big.