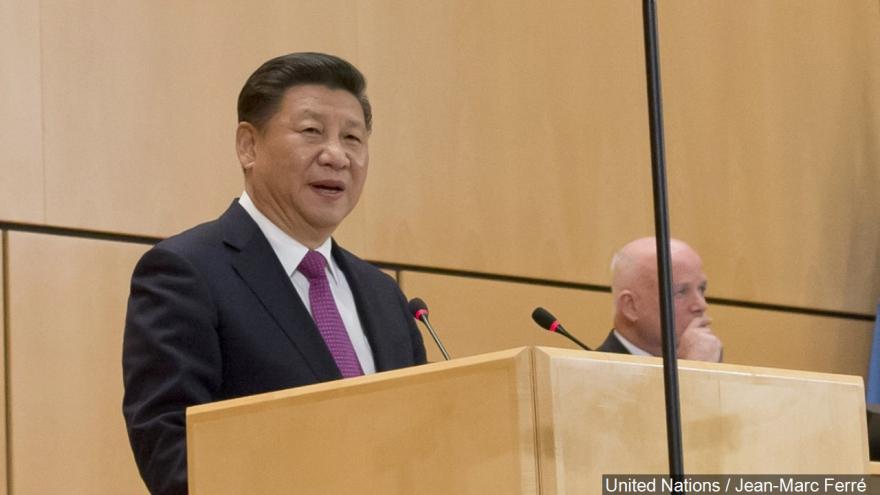 (CNN) -- Chinese President Xi Jinping has emphasized the Communist Party's control over the military as he prepares for a key leadership reshuffle later this year.

Speaking Tuesday at Beijing's Great Hall of the People on the 90th anniversary of the founding of the People's Liberation Army (PLA), Xi said the military should "carry forward and implement the Party's absolute leadership."

His words came after a major display of military force Sunday in a grand parade at a base in Inner Mongolia, on China's northern border, in which 12,000 troops, and more than 100 planes took part.

Analysts say Xi has taken advantage of the PLA anniversary to firmly establish his personal authority ahead of a Party Congress around November, during which the next Politburo Standing Committee -- the most powerful governing body in China, headed by Xi -- will be revealed. An exact date for the congress has not been announced.

Speaking after the parade Sunday, Yvonne Chiu, an assistant politics professor at the University of Hong Kong, said Xi wanted to "remind the military that they pledge loyalty to the Party, not the country" and to send a message to the country "that the military is firmly onside with him, especially as they're still pursuing the anti-corruption campaign, which continues to shake things up and cause uneasiness among the elite."

While the congress will almost certainly give the 64-year-old Xi another five years as China's top leader, it has been rumored he will seek to buck an established norm that leaders retire after two terms.

Xi was designated the Party's "core leader" in October last year, a powerfully symbolic title that was not granted to his predecessor Hu Jintao, who relied on a more consensus-building governance style compared to the all-powerful Xi.

"The importance of the Party's control over the military is an oft-repeated phrase, but Xi has emphasized it heavily during his tenure," said Tom Rafferty, China manager at the Economist Intelligence Unit.

He added Xi has sought the backing of "a younger generation of military officers" for his reforms, even as former top generals have fallen foul of corruption investigations.

At the same time, a wide-reaching and highly popular anti-corruption campaign has brought down many of Xi's rivals or potential successors. Typically the next Chinese leader would be obvious by the time of the Party Congress, as Xi was in 2007.

Last month however, Sun Zhengcai, widely seen as a rising star in the Party, was abruptly sacked as boss of Chongqing and placed under investigation for corruption. At 53, Sun was one of only a handful of senior Chinese officials capable of succeeding Xi under the current informal retirement age of 68.

While some have predicted Xi will break with the age cap norm -- upheld during the last three leadership turnovers -- as to allow himself and his allies to stay on, Chinese leadership analyst Bo Zhiyue told CNN in April that attempting to serve a third term might be more difficult.

"(Even if) he wants to be like Putin in Russia, to stay beyond his second term, we don't know if this can be realized," Bo said.

"The People's Army is an army with strong war capabilities," he said, one that will "never allow any parties to separate any piece of land from China."

Beijing is currently embroiled in a territorial dispute with India along the countries' border in the Himalayas, which has seen increased militarization on both sides and angry rhetorical salvos.

Last week, a Chinese Defense Ministry spokesman said the country will carry out further military drills in the border region and warned "it is easier to move a mountain than to shake the PLA."

On its southern border, China is also engaged in multiple arguments over territories in the 3.5 million square kilometer South China Sea -- almost all of which is claimed by Beijing.

Xi emphasized the importance of the PLA's combat readiness, saying that ongoing reforms of the army are key to ensuring its "readiness to defend state sovereignty and maritime interests."

"(The PLA) has won wars on the borders many times and showed the might of the nation and the military, it must continue to safeguard the borders over the land and the sea," he said.