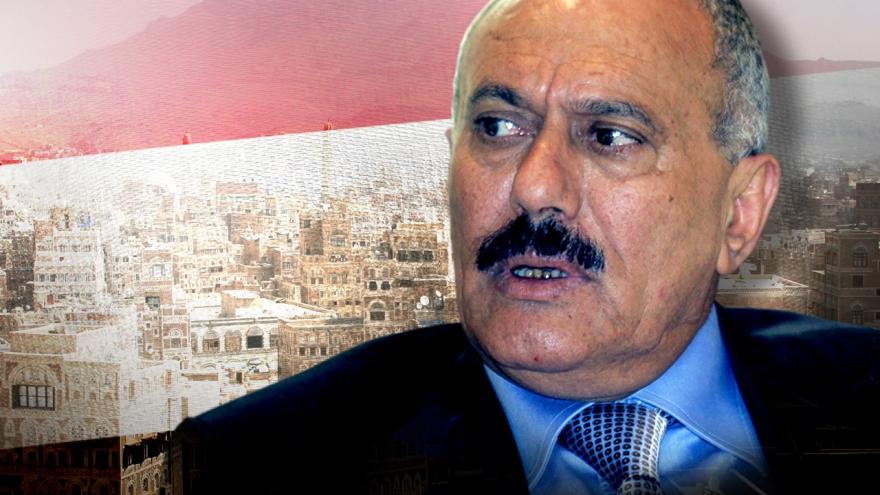 (CNN) -- Former Yemeni President Ali Abdullah Saleh was killed Monday by Houthi rebels as he tried to flee clashes with his allies-turned-foes in the capital.

Saleh's death at the hands of his former allies diminished hopes of an end to the country's protracted conflict and sparked fears of further bloodshed in rebel-held Sanaa.

Two days earlier, Saleh announced the end of a three-year alliance with the Iranian-backed Houthis. He said he wanted to "turn the page" on relations with the Saudi-led coalition that launched a military intervention against the Houthis in Yemen in 2015, leading to a crippling blockade of the country. The Saudi coalition welcomed the move and granted Saleh's forces air support in ensuing clashes with the rebels.

But for Saleh, known for his political cunning, the gamble proved to be a fatal move.

Sanaa's Houthi-controlled Interior Ministry confirmed his death. "The militias of treason are finished and their leader has been killed," it said in a statement.

CNN has seen footage and video that appeared to show Saleh's dead body. The images could not be independently verified.

Saleh was killed as he tried to flee Sanaa for his native town of Sanhan. His Sanaa home had been under Houthi siege for more than 48 hours before he decided to leave.

His vehicle was stopped at a checkpoint south of Sanaa, a senior Houthi commander told CNN. Clashes broke out, killing him and several of his senior aides, the commander said.

Saleh's body was brought back to the capital and has been handed over to the leadership of his party, the General People's Congress. The party said it held the Houthis responsible for safety and security in Sanaa and across the provinces.

Saleh's death seems likely to inflame what has become a proxy war in Yemen between Saudi Arabia and Iran.

"We reiterate our position that the political solution is the only way out of a prolonged conflict in Yemen," Ismail Ould Cheikh Ahmed, the UN special envoy for Yemen, said in a statement.

"Despite what may have seemed like a dramatic victory for Saleh, the Houthis fought back and they fought back hard," said Adam Baron, a Yemen analyst at the European Council on Foreign Relations and a former resident of Sanaa.

"What you're seeing now is that the Houthis are potentially poised to really completely consolidate power in Yemen," he added. "This makes a peace deal less possible."

Houthi leader Abdul Malik al-Houthi said Saleh's about-face was a "conspiracy that the Yemeni people prevailed over." Speaking on Al Masirah TV, he described Monday's events as "historic and unique."

The former Yemeni President's defection seemed to signal a breakthrough in the more than two-year war, potentially breaking a stalemate that sustained fighting.

But it triggered major upheaval in Sanaa.

Residents of the Yemeni capital, home to some 5 million people, said the previous 24 hours had marked the deadliest of Yemen's war. Incessant street battles and explosions extended across the city, according to residents, as schools and hospitals shut their doors.

At least 125 people were killed and a further 238 are known to have been injured in the fighting over the past five days, a spokeswoman for the International Committee of the Red Cross told CNN.

The spokeswoman added that the ICRC was urgently trying to supply fuel for generators along with body bags to two of the main hospitals in Sanaa, which were "running critically low" of supplies "due to the fact that no commercial imports are coming into the country."

Thirteen ICRC staff members were relocated Monday from Sanaa to Djibouti because of "fierce clashes" in Sanaa overnight, the spokeswoman added.

"You've seen a dramatic shift. I think you're seeing the Houthis effectively switch from seeing Saleh as an ally of convenience to a massive problem," said Baron.

The United Nations' humanitarian coordinator in Sanaa called for a "humanitarian pause" in the fighting on Tuesday between 10 a.m. and 4 p.m. local time. Jamie McGoldrick said the pause was necessary to allow civilians leave their homes to seek assistance and to let aid workers do their jobs.

"The streets of Sanaa city have become battlegrounds and people are trapped in their homes, unable to move out in search of safety and medical care and to access basic supplies such as food, fuel and safe water," he said.

"Ambulances and medical teams cannot reach the injured due to ongoing clashes, with reports of some coming under attack. Aid workers remain in lockdown and unable to move, impacting many life-saving activities."

McGoldrick warned that attacks on civilians may be considered war crimes. He asked governments "who have leverage on the parties to the conflict in Yemen to step up their engagement for the sake of the protection of the civilian population."

On Friday, the United Nations warned the Saudi-led coalition of the catastrophic consequences associated with not fully lifting the blockade.

Three-quarters of Yemenis need some kind of humanitarian assistance to meet basic needs, international observers have said, with more than 17 million people facing food insecurity, including 8.4 million at risk of starvation.

Saleh rose to power as part of a military coup, becoming president of North Yemen in 1978. After unification in 1990 he became President of all Yemen.

He officially stepped down as President in 2012, less than a year after protests swept through Yemen as part of the Arab Spring. He re-emerged as a major political player in recent years, joining forces with Houthi rebels in their fight against coalition forces led by Saudi Arabia, a former ally.

Saudi Arabia has been leading a coalition of Gulf states against Houthi rebels who ousted the pro-Saudi, internationally recognized government in Yemen in 2015.

President Abdu Rabu Mansour Hadi has been living in Saudi Arabia since the rebels took over the presidential palace early that year.

The UN Human Rights Office has documented more than 13,800 civilian casualties, including more than 5,000 people killed since fighting began. The numbers are believed to be a fraction of the overall death toll.