Yes, another one. Tropical Storm Ophelia forms in the Atlantic 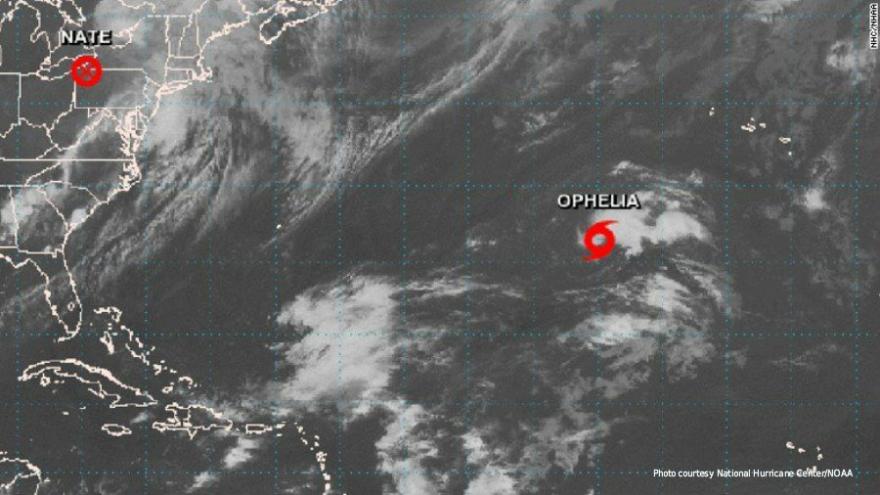 (CNN) -- Yet another tropical storm formed in the Atlantic Ocean on Monday, the 15th named storm of what has been an active and destructive hurricane season.

So far, though, Tropical Storm Ophelia doesn't appear to pose the same threat to battered islands and coastlines as posed by Harvey, Irma, Jose and Maria.

"Forecasts currently show that Ophelia is not a threat to land," CNN meteorologist Judson Jones said.

The new storm formed in the open Atlantic from Tropical Depression Seventeen, the National Hurricane Center said in its 11 a.m. advisory. The tropical storm was carrying 40 mph winds and was located about 860 miles west-southwest of the Azores Islands, the center said.

The current forecast calls for Ophelia to strengthen gradually during the week as it drifts toward the east and become a hurricane on Friday, which would make it the 10th hurricane of the 2017 season.

Most active season since 2005, the year of Katrina

This season is the most active since the 2005 Atlantic hurricane season, the year Katrina struck New Orleans and Mississippi. That year there were 28 named storms, of which 15 were hurricanes.

Of the named storms this year, nine have been hurricanes and five turned into major hurricanes of Category 3 or more, CNN meteorologist Jennifer Varian said.

With nine consecutive named storms becoming hurricanes already this year, it would take just two more to break the record of 10 set in 1878 and matched in 1886 and 1893, Varian said.

The most recent hurricane, Nate, killed 28 people in Central America and slammed the US Gulf Coast over the weekend, causing heavy rains and flooding. It has been downgraded to a tropical depression.

"The peak of the hurricane season is the first or second week of September, but it's not over until the end of November. October is usually active and there could be a few more named storms," Varian said.