Your complete guide to the 2017 MLB World Series 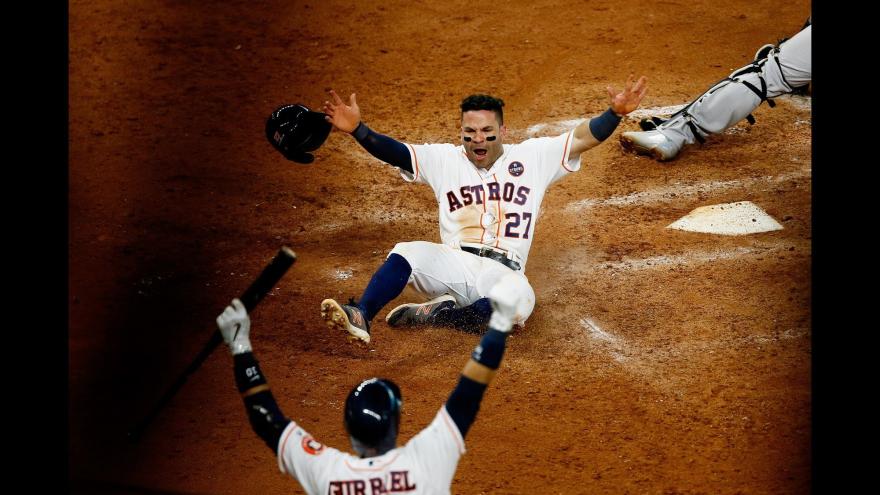 (CNN) -- After a grueling six months full of heartbreak and miracles, it's time for the very best part of baseball season: The one week non-baseball fans remember it exists.

It's the World Series! And if you're a West Coaster, you're really gonna want to pay attention to this one.

Here's everything you need to know about the annual fall classic, plus a few tidbits to sound baseball-smart with your friends.

What teams are playing?

The Houston Astros will face the Los Angeles Dodgers in a best-of-seven series.

When is the World Series?

The games switch off between each team's home stadium, so here are the dates and locations for each. Remember, it's best-of-seven, so we could get as few as the first four (boo!) games listed below. You definitely want seven, though. Winning every game isn't fun. Eking out a close win in a Game 7 that will haunt the losing team's fans for the rest of their lives is the way to go.

Note that all of the games start around 8 p.m. ET, but for mysterious broadcasting reasons they have official start (or "first pitch") times of, like, 8:09 p.m. Just be at your TV or preferred device/watering hole around 8 p.m. ET and you'll be fine.

Where is the World Series played?

Yes, obviously Houston and Los Angeles. But if you must know, the Houston Astros play at Minute Maid Park and the LA Dodgers play at, well, Dodgers Stadium.

All of the games will be broadcast on FOX. It is also strongly advised you acquire some friends or a significant other and watch it with them, as baseball games regularly blur the line between delicious tension and soul-crushing tedium.

Is the weather going to be nice?

It depends on how hot you like it, because it is going to be H O T. Who would have thought a baseball series in early fall in South Texas and Southern California would be like this?

In fact, the forecast for the first pitch of the World Series in Los Angeles Tuesday night is 99 degrees. If it gets that intense, it would be the hottest World Series game on record.

That sounds, honestly, awful. For totally non-betting purposes, who would have the advantage in such a sweltering scenario?

The Dodgers already have an advantage, because they're playing at home, but they are also wearing white which will be nice in the heat. However, don't count the Astros out! They, too, know the pain of extremely hot baseball and will probably not be cowed. If it were, say, the New York Yankees from the more temperate northeast, that would be a different story. But it's not. It's not the New York Yankees.

How much are tickets?

Let's put it this way. You could pay half of your monthly rent for a one-bedroom apartment in LA, or you could get the cheapest possible, standing-room-only ticket to the first game of the World Series. Either way, you're out about $800.

The most expensive Game 1 ticket on reseller site Vivid Seats is about $33,000 as of Tuesday morning, which is about how much Houston Astros pitcher Justin Verlander makes with every five pitches he throws.

Just, you know, in case you needed a reason to scream into the void today.

Who has won more World Series?

The Dodgers have won six World Series titles, and the Astros have won...zero. However, both of these teams are extremely good and past performances don't really matter on this current stage. Why? Because the last time the Dodgers won a World Series (1988), most of the players on both teams' rosters weren't even born yet.

I don't mean to be rude but what, exactly, is a Dodger?

The name dates back to when the team played in Brooklyn, and it's a testament to the deeply athletic feat of not getting run over by streetcars. From the Dodgers website:

"The term 'Trolley Dodgers' was attached to the Brooklyn ballclub due to the complex maze of trolley cars that weaved its way through the borough of Brooklyn. The name was then shortened to just "Dodgers."

Both teams in this series have had different names in the past, some cooler than others. The Astros used to be the Houston Colt .45s. The Dodgers, for a time, were the Brooklyn Bridegrooms. So, in comparison, "Dodger" really isn't that bad.

Are any of the players by chance engaged to a famous supermodel?

Yeah, Justin Verlander, that Houston Astros pitcher who makes an entire household income by throwing a dozen or so measly baseballs, is also engaged to Sports Illustrated Swimsuit cover model and ride-or-die baseball champion Kate Upton. So, root for him or develop a seething hatred of him accordingly.

Who are some other dudes I should know about?

There are so many dudes! On the Astros, you should probably know José Altuve, who's one of the best players in baseball and also holds the honor of being the shortest active MLB player at 5' 6".

On the Dodgers, you may or may not know about Clayton Kershaw, who's one of the best pitchers -- if not the best -- in the game. If you can believe it, he makes even more money throwing baseballs than Justin Verlander does, and was, in fact, the highest-paid MLB player this year.

If it's a good story you're looking for, look no further than the Dodgers' Kiké Hernandez. He is Puerto Rican and has raised more than $100,000 for recovery efforts in the wake of Hurricane Maria. He also loves hitting home runs.

Okay I'm pumped. Give me all of your best home run euphemisms RIGHT NOW.