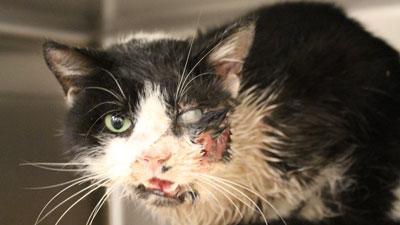 (CNN) -- It's like a plot line ripped from the scripts of "The Walking Dead" -- if the show's cast were made up of cats and took place in Florida.

A Tampa, Florida, cat found seemingly dead after he was hit by a car showed up alive in a neighbor's yard five days after he was buried.

"We have seen many amazing cases at our full-service veterinary clinic, but this situation may take the cake," the Humane Society Tampa Bay, where the cat underwent surgery Tuesday, said in a release.

Bart, or "zombie cat" as the feline is now being referred to on social media, was discovered "unresponsive" by his owner last week lying in a pool of blood. His body was cold and his face was severely disfigured.

"If we'd seen that cat on the road, we'd assumed he was dead," Nash McCuthchen with the Humane Society told CNN.

Bart's owner, Ellis Hutson, along with the help of a neighbor, buried his beloved pet in his yard.

Five days later, a different neighbor found Bart walking in her yard, after he seemingly clawed his way out of the grave.

The neighbor returned the cat to Hutson, who called the Humane Society for help.

Bart was in bad shape, McCutchen said, with maggots covering open wounds on his body, and he had difficulty walking. The cat was dehydrated, his left eye ruined.

But remarkably, McCutchen said, the kitty had no internal injuries, making the Humane Society able to treat him. Bart had surgery Wednesday to remove his left eye and wire his jaw shut.

"He seems to be a little fighter," McCutchen said.

Despite all the trauma of getting hit by a car, being presumed dead and buried alive, McCutchen said Bart is a very friendly and affectionate cat. He loves to be petted and purrs at visitors, she said.

Bart is expected to recover and could return to his owner as early as next week.