Zoological Society wants to take over management of zoo 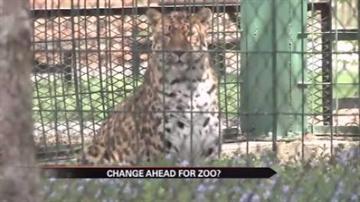 SOUTH BEND, Ind. -- An organization that partners with the Potawatomi Zoo wants managerial powers over the zoo. They say if the city of South Bend allows it to happen, there would be an increase in attendance and an increase in exhibits and other things the zoo has to offer.

"I brought my grandchildren Brooke is three and Claire is 10 months,” said Kugler.

Maryanne and Hugh Stevenson are visiting from Bloomington, Illinois with their great-grandchildren.

Both said the main attraction was the train.

"That's all she could talk about from the time she came in was riding the train,” said Kugler.

The train isn't something that the city of South Bend provides. It is funded by the Zoological Society, along with the hands-on butterfly exhibit.

It is proposing a change that would allow it to manage the entire zoo.

The zoo would still be owned by the city.

Dean says if the city gives the go-ahead on the proposal, more noticeable changes would be added  to attract not only children and their families from surrounding areas, but families from south bend as well.

Dean says under the agreement, the city would still provide about $1 million a year for operational costs and the partnership would pave the way for renewal of the zoo's  accreditation which is up for review in March.