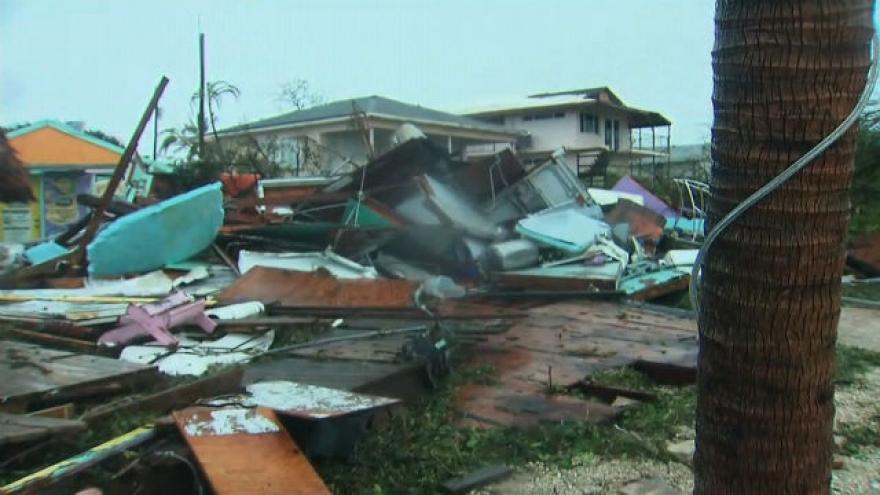 (CNN) -- Officials were struggling Monday to reach the majority of the Florida Keys -- namely, the stretch of islands west of Key Largo -- amid early indications that Hurricane Irma showed the archipelago little mercy.

The Keys are closed to the public, including residents, and several areas remain without water, power and communications, officials said.

"My heart goes out to the people in the Keys," Gov. Rick Scott said. "There's devastation. I just hope everybody survived. It's horrible what we saw."

There were conflicting reports about damage to the pipeline that provides drinking water from the mainland, but the Florida Keys Aqueduct Authority issued a statement saying "the transmission main appears to be intact."

However, the widespread water outages and low water pressure throughout the Keys appear to be a result of problems with smaller distribution systems, the authority said, explaining it had issued a precautionary boil-water notice.

Things were looking so dire that an estimated 10,000 people who rode out the storm in the Keys may require evacuation, the Defense Department said. The island chain is home to about 79,000 people.

Key West city manager Jim Scholls says there are no plans to evacuate anyone.

Irma's eye passed over Cudjoe Key, about 20 miles east of Key West, Monroe County Commissioner Heather Carruthers said. There was a great deal of storm surge between Cudjoe Key and Marathon Key, but it wasn't as severe as during Hurricane Wilma during 2005, she said. Irma also appears to have caused less structural damage than Wilma, she said.

Two people died, but it's unclear whether the deaths are storm-related. Rescuers expect to find some loss of life as they make their way into the island chains, Carruthers said, but "I don't think it would be significant because so many people evacuated."

The USS Abraham Lincoln, an aircraft carrier, arrived on Florida's East Coast. Its helicopters were flying over the Keys to assess the condition of airports, officials said.

Efforts to access battered locales and provide relief supplies have been stymied by Irma's destruction, according to officials and local media reports.

The airport in Marathon requires significant cleanup, and Key West's airport has yet to reopen. Accessing the Keys via boat is too dangerous because the near-shore waters are littered with debris, including unmoored boats and navigational markers. And US Highway 1, which runs from the Florida mainland to Key West, is underwater at mile markers 29 and 75, and blocked by a large pole at mile marker 36.

The condition of the main thoroughfare through the Keys is of particular concern as Big Pine Key sits between mile markers 29 and 36, making it impossible to know the extent of damage on that island, said National Oceanic and Atmospheric Administration meteorologist Bill South.

"It's the worst storm I've ever seen," said South, who rode out Irma in a Key West bunker built to withstand 220-mph winds.

Officials to evacuated residents: Stay away

Southbound lanes of the 113-mile-long US 1, also known as the Overseas Highway, will remain blocked until the state Department of Transportation can guarantee the integrity of bridges along the highway, said Monroe County Administrator Roman Gastesi.

An initial assessment suggests a portion of the highway on Lower Matecumbe Key has been damaged, and a Florida Department of Transportation crew has been dispatched, said Jeannie Cann, an FDOT coordinating officer.

Marathon Councilman Steven Cook was providing live updates via Facebook about his effort to get home from the mainland Sunday, but the updates stopped in Tavernier, about 25 miles from the coast. Marathon Fire-Rescue was also providing updates as it made its way west, but it, too, stopped updating Facebook after declaring Sunday evening, "We have made it to Tavernier."

Councilman John Bartus of Marathon, about 65 miles from the mainland, called Irma's aftermath a "humanitarian crisis" and urged all evacuated residents to stay away until officials can remedy some of the destruction and rescue those who ignored the mandatory evacuation order.

"PLEASE - don't try to return to the Keys until you get an official okay," Bartus said on Facebook. "The first responders and crews on the scene are adamant that the Keys cannot handle any more people until they can assist the ones who are there and in need."

Gastesi, who predicted this level of destruction last week and warned folks they were on their own once Irma's outer bands approached, told CNN that the Keys are closed unless you're a recovery worker or emergency responder.

For those who remain on the islands, a dusk-to-dawn curfew will be in effect until further notice, Monroe County Sheriff Rick Ramsay said.

Those who hunkered down during the storm will understandably want to venture out to explore the damage, but officials firmly warned anyone doing so to beware of downed power lined and flooded areas.

Medical resources on the island chain are especially thin. Baptist Health said Monday morning that two major hospitals in the Keys -- Fishermen's Hospital in Marathon and Mariners Hospital in Tavernier -- remained closed. A statement from the Lower Keys Medical Center in Key West said, "Our hospital team is well. It will be an uncertain period of time until we mobilize our Tier 2 employees."

A CNN crew traveling southwest on the Overseas Highway didn't make it past Key Largo, as downed trees blocked a road. There were also jet skis, boats, power lines and a billboard littering the roads south of Key Largo.

At Snappers, a restaurant and bar in Key Largo, patrons cheered Thursday when asked if they were riding out the storm, and owner Peter Althius said he wasn't leaving until "the s**t hit the fan."

Returning Sunday, a CNN crew found splinters where Snappers' outdoor bar previously stood. Irma had blown most of it into a fence surrounding neighboring businesses. Boat slips had been smashed and tossed ashore. Furniture, flotsam and other debris had been blown into the surviving westernmost wall of the restaurant.

Cleanup efforts in the Keys are presently focused on airports and roads, which are integral to getting rescuers ad suppliers onto the island chain.

Once cleared, the airports will be used to accept aircraft carrying relief supplies, he said. Commercial and general aviation services will be announced later, Senterfitt said.