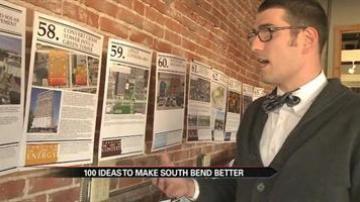 SOUTH BEND, Ind.- One man in Michiana has 100 ways to change the way South Bend looks and operates. Jonathon Geels says he is no hometown hero but he wants folks to respect the city he grew up in. He believes, in order to see a change in the community, it all starts with a conversation. He hopes the project will get people talking and hopefully end up creating some amazing things for the city.

"This is really an opportunity to empower people to move forward and to engage people and help them take ownership of their city," said Jonathon Geels, founder of the 100 Ideas Project.

This weekend, Geels is encouraging conversation in the community. He's come up with 100 ideas that could move different parts of Michiana forward. With all of the negative news happening in the area, he thinks his ideas can bring positive headlines.

His volunteers agree. Caitrlin Hodges is a student at Notre Dame and is new to the area. But it didn't take long for her to notice the good parts of South Bend.

“When I first got here, I definitely heard about the violence in South Bend. When you’re on campus, sometimes all you hear about are the shootings and stuff. Especially about the child that was shot a couple weeks ago," said Hodges. "But I think once you get out there, you realize it’s a really homey place. It’s a really friendly place and people really care about it which is inspiring to me.”

When looking at these ideas on paper, some of them might seem a little far-fetched. But folks in Michiana have already shown interest.

“I think it’s exciting to see a lot of these ideas already in action ” said volunteer Nora Goebelbecker.

In fact, a quarter of these 100 ideas will happen. Geels said they all stem from simple conversation.

Feelings of empowerment will be at the Emporium on Saturday as folks gather to talk about many of these ideas. Ideas that center around making South Bend a better place.

“My vision for South Bend is that it would be vibrant city where people that are connected and empowered to move things forward, move their own ideas forward. It’s not about any one particular person or group but about everybody coming together,” said Geels.

The event starts at 4:30 pm on Saturday, April 26th. Funds raised will go to the Unity Gardens and the Downtown Comedy Connection Charity Fund.