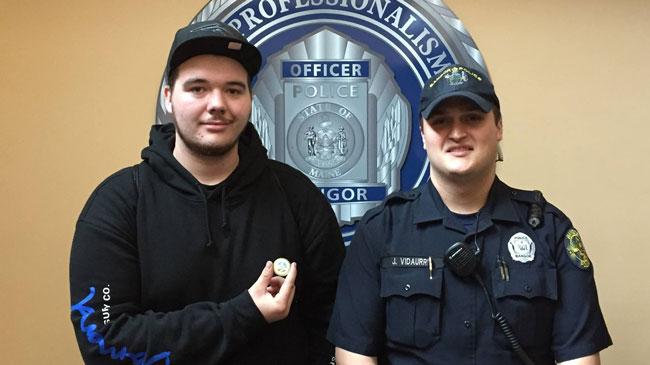 (CNN) -- Things seems to be pretty chill in Bangor, Maine.

Sure, a 12-year-old decided to steal a bus and drive it around a neighborhood, but no one got hurt. And, thanks to a concerned citizen and an epic post by the Bangor Police Department, we're free to have a little laugh at it all.

The action started Thursday when John W. St. Germain III and his girlfriend spotted a bus being commandeered by a young driver -- too young.

St. Germain's girlfriend started taping, and on instinct the pair followed the "blue missile of destruction" and put in a call to police.

This is only funny because the Bangor Police Department said St. Germain was able to get on the bus and convince the underage driver to give up the wheel (he was the only one on the bus, thankfully). The boy was taken into custody, St. Germain got some recognition, and someone with a lot of pent-up creative energy at the police department put together a truly amusing account of it all:

Here are the highlights:

"Now, he would not win one of those school bus rodeos nor would he get cookies and cakes from adoring parents at the end of the year for how he conducted himself with all that precious cargo in the back. But, as a "glass half full" kind of guy, I say he did not do that badly."
"John W. St. Germain III and his girlfriend observed this young man driving a bus and thought, 'hey that kid is way too young to be driving a bus.' Common sense runs deep in a good Mainer."
"John bailed out of the car and ran up to the door of the bus and Ralph Kramden'd his way into the seat. "And awwwaaaay we gooooooo!"
"Yes. In a world where they let the Kardashians have access to social media, we are unable to add a still photograph to a Facebook post that includes video."

No word on charges.

And in case you were wondering, yes, this is the same police department that is home to the nationally-famous Duck of Justice.