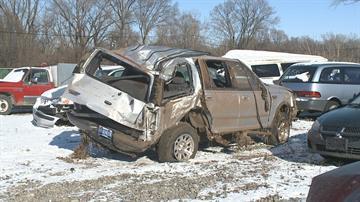 ST. JOSEPH COUNTY, Ind. – Three kids take off on a joyride and crash down a dark, icy road just before 2 a.m. on Saturday. Now, one boy is dead, two teens injured and the St. Joseph County Sheriff's Department is investigating the fatal crash.

According to police, a group of kids were at the victim, 12-year-old Cory Downhour’s house in South Bend Friday night.

At some point, he and two others, a 14-year-old boy and a 13-year-old girl took off in a silver Ford Expedition owned by a 17-year-old who was also at Downhour’s house.

More than ten miles outside of South Bend in the town of Warren, the SUV crashed on an icy secondary road at 1:45 a.m. on Saturday.

Headed south down Quince Road the 14-year-old at the wheel lost control, the SUV sped off the pavement and rolled several times before it landed in a roadside ditch.

Police said the 14-year-old had no kind of license or permit to operate any type of motorized vehicle.

“It’s just a bad decision that they made,” Paul Wassenhove said at the crash site. Wassenhove lives near the intersection of Quince and Jackson Road, the crash happened right across the street from his driveway.

Investigators said it did not look like any of the kids were wearing a seat belt at the time of the crash.

“After the accident, the two children that did survive went to the nearest house or to someplace looking for help,” Wassenhove said.

The 12-year-old boy was pronounced dead at the scene; police identified him as Cory Downhours of South Bend.

The 14-year-old male driver and the other passenger, a 13-year-old girl were hospitalized with non-life threatening injuries. Their names have not been released because they are minors.

“I’m sorry, sorry to the parents,” Wassenhove said this is a tragedy that could and should have been avoided. “The decisions you make in your young age are the ones you have to live with for the rest of your life.”

Badly damaged, the Expedition is now parked outside a nearby repair shop while the St. Joseph County Sheriff’s Department investigates.

"It was a pretty bad wreck, a pretty bad accident," Dean Kesler said, he towed the SUV out of the ditch and to his shop Saturday morning. "It was very icy, very slippery and the road, where it happened is quite narrow," Kesler said.

Police still need to figure out what exactly caused the crash and how the kids got the keys.

"Just joyriding, having a good time,” Kesler said, “They were underage, young people and it was a borrowed car."

Investigators said it’s still unclear if the owner gave the kids permission to take the SUV or if the three just took the keys and took off, 17-year-old has not been cooperating with police. That name has also not been released because of the person’s age.

After the vehicle was towed away, Wassenhove found a stuffed animal stained with blood in the ditch. He said it must have been inside the SUV when it crashed. Now, wrapped in a blanket next to a bouquet of flowers the blue stuffed dog serves as a memorial for 12-year-old Downhours.

“It’s just a terrible thing, and now I have to look at this everyday when I pull out of my driveway and think about that little guy that didn’t make it,” Wassenhove said. “I wish he was here.”

Wassenhove said did not know Downhours, but did recognize the last name of one of the victims; he said the family lived in the area but declined to give any more information.

Police would not say if the 14-year-old driver would face any criminal charges. Toxicology reports were ordered for all three of the people inside the SUV, but the results may not be available for several weeks.

Investigators are trying to put together a timeline of the events leading up to the crash, police ask anyone with information about the kids where the kids were or what they were doing before the crash to contact Major Dean Chandler at (574) 235-9611.