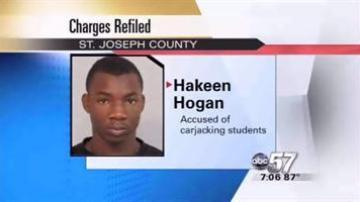 19-year-old Hakeen Hogan of South Bend was originally charged in the incident back in 2009. But because the victims could not identify him, and the co-defendants refused to testify, the state dismissed those charges.

Based on new evidence he is now being charged with robbery, carjacking and criminal confinement.

Hogan is being held at the St. Joseph County Jail on an unrelated matter.