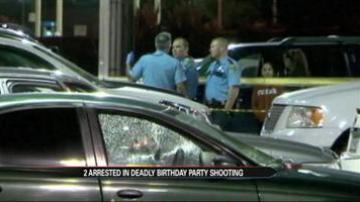 CYPRESS, Texas -- Monday morning police arrested two people, a 21-year-old and an 18-year-old, in connection with a shooting that happened at a teenager's birthday party near Houston.

Police said Sunday that nearly 100 people were inside the home for the party when an argument turned violent that is when shots rang out.

"Let me describe the event last night as a birthday party gone wild. To that end, let me also say, that anytime that you promote a birthday party on social media you have no control over who to expect at your door," said Sheriff Adrian Garcia.

Two people were killed and at least 19 others were wounded, some critically.

Monday, school districts in the area added security as a precaution.