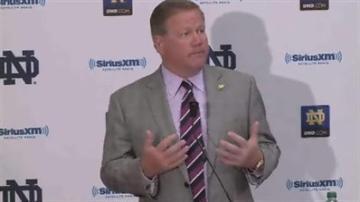 It’s the fourth best recruiting class in the country, but Head Coach Brian Kelly and his staff believe it's the best yet in the Kelly era at Notre Dame.

The future is bright for the Notre Dame Fighting Irish.

"For us, taking that next step forward is to continue to build our football program within and developing football players, so when they get back on that field in 2013, we finish it. We finish it off,” said Coach Kelly.

Indiana native, Jaylon Smith is at the top of the Irish class- coming in at number 7 in the country.

With so much new talent, the Irish are building some much needed depth.

But there are a few areas where Coach Kelly sees room for improvement.

"I think the O-line and D-line will be an area that we'll continue to work towards,” said Kelly.