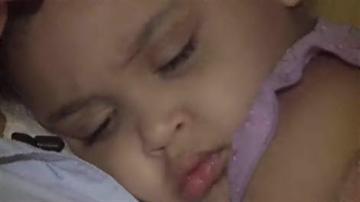 ELKHART, Ind. –  It is a parent’s worst nightmare.  You leave your child alone with a babysitter you think you can trust and you child ends up battered and bruised.  Sadly a mother and grandmother in Elkhart are living this nightmare right now.

The mother says she left her three-year-old daughter with her boyfriend and when she returned, her daughter’s eyes were swollen shut and she had bruises all over her body.

Aleah’s mom and grandma say police did their job.

The suspect, 20-year-old Tyler Beathea is currently being held at the Elkhart County Jail.  But they say for some reason his child battery charges have been reduced to a misdemeanor and they want to know why.

When you look at three-year-old Aleah, you would never know that just two days before Christmas, she was brutally beaten.

Her mother, Brooke Jackson, left Aleah alone with her then boyfriend, Tyler Beathea, who she thought she could trust.

“Aleah got along with him.  He seemed to be really good with her and had babysat his nieces and nephews,” said Aleah’s Grandma Selina Gilbert.

But she says what she returned home to was horrifying.

“She had a mild concussion.  She went from looking like Aleah to almost alien.  Her head was swollen out to here,” said Gilbert.

After a series of hospital visits, police questioned Beathea and that is when Jackson said he confessed to what he did.

“Tyler admitted to grabbing her by the hair and open handedly hitting her on top of the head a few times and then he said he whooped her with a belt,” said Brooke Jackson.

Police arrested 20-year-old Tyler Beathea and charged him with what they say he did to little Aleah.

“The original charges were battery of a minor with serious bodily injury which we were told is class b felony by the detective and the second charge was neglect of a dependent minor,” said Selina Gilbert.

But a few days ago, Gilbert checked the Elkhart County Sheriff’s Department and was shocked.

“The charges had been reduced,” said Gilbert.

I called the Elkhart County Jail and confirmed that Tyler Beathea was originally charged and booked for a class B felony and had no bond, but when I checked online today, I saw that indeed that charge had been reduced from a class b felony to a class b misdemeanor with a $75,000 bond.

Gilbert says charging Beathea with only a misdemeanor is not justice for three-year-old Aleah.

“What are they going to do to give my granddaughter Aleah justice and to keep him from harming another child ever again?” said Gilbert.

We called the prosecutor and the detective working the case to find out why the charges have been reduced. Because it is the weekend, they have not responded. We will continue to check with them during regular business hours.