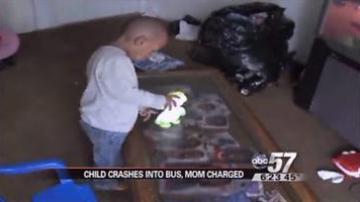 INDIANAPOLIS-- Friday, an Indiana mom is charged with neglect, after her 3-year-old son started her car and crashed it into a bus.

Police arrested the 23-year-old mom outside of an Indianapolis gas station.

Officers said she went in to buy cigarettes and left her keys in the ignition.

Her son, who wasn't in a car seat, climbed into the front, started the car, and put it into reverse.

The car crossed two lanes of traffic, before slamming into a city bus.

Anthony Schneider, with the Indianapolis Police Department was assigned to the case.

Schneider said, ""Kids are adventurous. They're going to try to do things that they're not supposed to do. If you're going inside, take the kids inside. Nowadays, anything can happen."

The mother's children are now staying with her boyfriend.