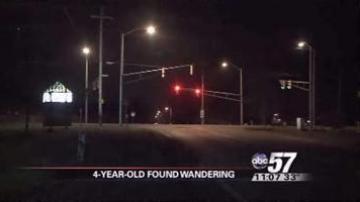 SOUTH BEND, IND. -- Drivers frantically pulled over on Portage Road and Brick in South Bend Wednesday, because a 4-year-old little boy was running across the street without a parent.

The little boy's mother Cynthia Baumer did not want to talk about the incident.  Drivers however had a lot to say about the little boy crossing the street without adult supervision.

"I was at the stop light on Brick Road when I saw a little boy crossing without an adult with him, and I became concerned," said Kuminecz.

Kuminecz said she and other drivers pulled into the South Bend Clinic and watched the little boy walk right into the office.  Kuminecz followed him to make sure he was okay.

"I told the secretary the little boy was alone and she immediately called police", said Kuminecz.

Kuminecz also told me police did have a long talk with the parents who were both worried sick and apologetic.  Police said a report was made about the incident and was handed over to Child Protective Services to review.