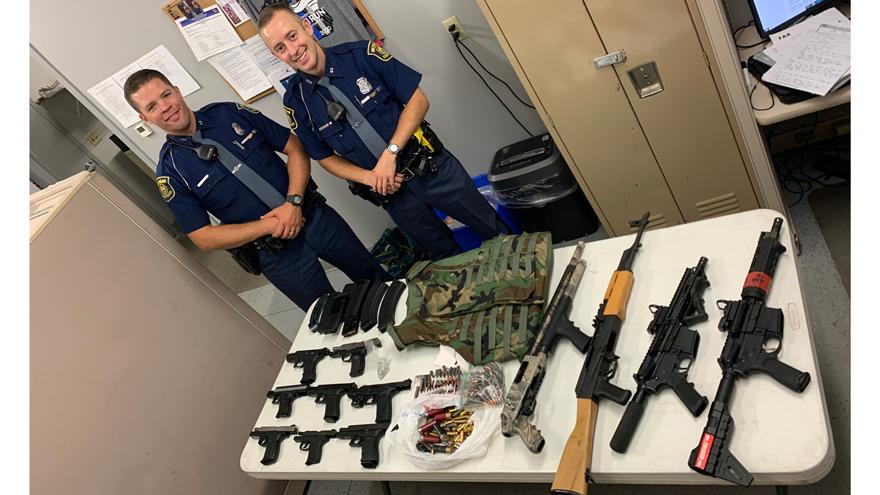 Officers working the Secure Cities Partnership in Benton Harbor arrested 5 people during a traffic stop and seized a dozen guns. Investigators say they believe the suspects are responsible for 10 or more retaliation shootings.

Michigan State Police troopers working the SCP detail were headed to the River Terrace Apartments to assist with a disturbance call Thursday evening around 9:30 p.m.

While on their way, a description of the suspect vehicle was broadcast. Troopers located the vehicle on Colfax Avenue and conducted a traffic stop for not having electronic verified insurance, reports said.

The driver had a pistol sitting in plain view on his lap and several other guns were in plain view inside the vehicle, reports said.

The driver told police he had a carry concealed pistol license and said the guns belonged to him, reports said.

The driver had a valid license for a CPL but only one gun was registered to him.

Troopers say they had intelligence there was going to be a shooting that night. The suspects that were arrested are believed to be responsible for 10 or more retaliation shootings, report said.

One of the weapons appears to match ballistic evidence recovered from an open homicide investigation and other reported shootings, reports said.

Troopers say they likely prevented a shooting Thursday evening. They believe the group is responsible for shooting up five houses and hitting/injuring 6 people since July 21, reports said.