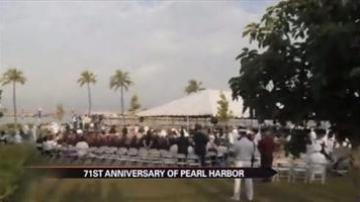 December 7th is the anniversary of the attacks on Pearl Harbor which launched the United States into World War II.

Along the entire West Coast, communities honored vets who served in the Second World War.  A moment of silence was held at 7:55 a.m. marking the moment the bombing began.

Thousands of survivors attended one of the ceremonies in Hawaii.

"Feeding the pigs that morning and all of a sudden here comes planes with gunfire, cannon fire and planes flying so low you can wave at the pilots," said Jimmy Lee, survivor.