A crash landing in a Florida backyard 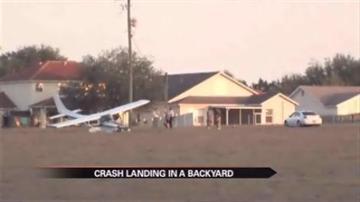 BRANDON, Fla. -- A crash landing into a Florida backyard turned out to be a close call, all thanks to a Veteran pilot.

John Murray and his wife took off in their Cessna headed to Miami when the engine went out. Murray has been flying for 50 years, and said the whole plane was shaking and oil was leaking all over the windshield, blinding him.

The couple said they never panicked; however, the same couldn't be said for the witnesses who saw the crash.

"The plane hit kind of hard. It did a nose dive down. It almost hit the power lines and thank God it didn't," said Esmerlin Gomez, who witnessed the crash.

"I just did what every pilot is trained to do. That's why they train you," said John Murray.

The pilot said his goal was to avoid any buildings and especially the power lines. Murray could barely see out his window.

Everyone walked away without a scratch.